Headline of article had referred to ‘Nama’s busted tycoons’ 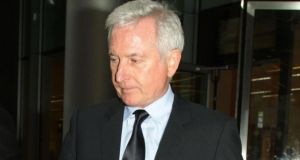 Associated Newspapers has also made a substantial contribution to a charity nominated by Paddy McKillen, according to the developer’s solicitor Paul Tweed. Photograph: Yui Mok/PA Wire

Developer Paddy McKillen has received an apology in the High Court over a column in the Irish Daily Mail.

The paper’s publishers, Associated Newspapers (AN), has also made a substantial contribution to a charity nominated by Mr McKillen, according to the developer’s solicitor Paul Tweed.

Mr McKillen sued Associated Newspapers over a Matt Cooper column on August 5th, 2015, dealing with the return to the market of property developers, some of whose loans had been taken into Nama.

The case was due for hearing before Justice Bernard Barton and a jury on Tuesday when Jim O’Callaghan SC, for Associated Newspapers, said the matter had been settled and a statement would be read out by Michael Kealey, solicitor for the Mail.

The statement said in the course of the column, reference was made to the well-known developer, Mr McKillen.

“The headline to the article, which was not written by Matt Cooper, referred to ‘Nama’s busted tycoons’.

“We wish to make it clear that it was never our intention to suggest Mr McKillen fell within this category,” it said.

The statement said Mr McKillen’s borrowings have in fact at all times been fully performing and he has never been a burden on the taxpayer.

“He has contributed millions of euros to the State in revenues and created over a thousand jobs. He successfully blocked Nama from acquiring his loans and has since repaid his IBRC loans in full.

We are happy to make this clear and to apologise to Mr McKillen.”

On the basis of that the judge made an order striking out the proceedings.

In a statement afterwards, Mr McKillen’s solicitor, Mr Tweed, said his client was “very satisfied with the comprehensive and categoric retraction and apology” which together with a substantial donation to a charity nominated by his client “has provided a total vindication of his reputation”.