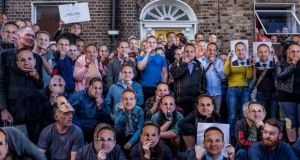 The owner of 35 Summerhill Parade has said having made numerous requests to the occupiers, who are trespassing on the property, to vacate the premises, the Trustees of Pat O’Donnell & Co Ltd Retirement and Death Benefit Plan had no option but to go to court. File photograph: James Forde

The owner of a vacant property in Ballybough, north Dublin that has been occupied by protestors since last week, has applied to the High Court to remove the occupants.

The legal action has been taken by PJ O Donnell as trustee of the company.

Lawyers for Mr O’Donnell told the High Court on Wednesday that the owner seeks several injunctions including ones requiring all those occupying number 35 to leave and to cease interfering or dealing with any of the properties.

The court heard while number 35 is currently occupied, there has been some interference with the other properties, and there are concerns the others may be interfered with in the future.

Mr O’Donnell, who holds the properties in trust for the members of the benefit plan, also seeks damages for trespass and intentional interference with the owner’s economic interests.

The court heard there are 67 members of the benefit plan, including 18 pensioners, who are employees and former employees of Pat O Donnell & Company.

At the High Court on Wednesday, Mr Justice Charles Meenan granted the owner, on an ex parte basis, permission to serve short notice of the proceedings on the occupiers. The court also granted the owner permission to pin the motion papers on the occupied property and made an order the all those in occupation identify themselves to the High Court. The Judge made the matter returnable to Thursday.

Julia Lawlor Bl for the owner said the properties were vacated in May after a senior officer with Dublin City Council Fire Brigade raised fire safety concerns. Arising out of those concerns the owner decided to vacate the properties until all necessary upgrading had taken place.

Payments were also made to those who had to vacate the properties so they would have funds to find suitable alternative accommodation, the court was told. Works were scheduled to take place to refurbish the properties, but the actions of those in occupation are delaying the process, counsel said.

In recent days the Fire Brigade has informed the owner that if the occupation continued it would have to take action against the owner. Counsel said her client has also been informed of a risk that the properties insurance will be cancelled if the situation continues. Counsel said her client does not know who exactly is in occupation. Various persons have given interviews to various media outlets but they remain unsure exactly who is in the property.

In a sworn statement to the court, Mr O’Donnell said he was on holidays abroad when he heard reports about the occupation.

He said he had hoped they would leave voluntarily as the buildings are not fit for occupation, but this had not happened. He said he did not know who or how many people are in the properties, but said he is extremely concerned about the possibility that alterations have been carried out to what are protected structures.

Separate to the court case, the company released a statement to the media for the first time.

“Having made numerous requests to the occupiers, who are trespassing on the property, that they vacate the premises, the Trustees have been left with no other option but to pursue the matter through the Courts,” the statement said.

The properties had previously been rented to three landlords, “who were responsible for the maintenance and care of the properties and for the letting of the accommodation”, a spokesman for the fund said in the statement.

“The Trustees, who are in ongoing contact with the Fire Department, emphasise that they are not liable for any occurrence that may arise from the unlawful occupation of the premises.”

Pat O’Donnell & Co is a machinery plant supply firm, and is a long time sponsors of Clare GAA.

The group of housing activists occupying the property include members of Dublin Central Housing Action (DCHA) and student protest group Take Back Trinity. The coalition of activists state they want the building to be purchased by Dublin City Council via compulsory purchase order, to be used as social housing.

In early May, a large number of primarily Brazilian tenants were evicted with 24 hours notice from the house, and five other neighbouring homes on the street owned by the fund, the DCHA has said. Up to 20 tenants had been living in each property, sharing rooms in cramped bunk bed accommodation.

Also on Wednesday, the activists organised a march from the property to Department of Housing offices in the Customs House. A large group of activists held a sit-in at the offices, to present a list of demands to officials.

The demands included a total ban on evictions, and for all vacant land to be used to build public housing. The coalition of housing groups are set to hold a meeting to determine if the occupation of the offices will continue overnight.

Speaking at the sit-in, People Before Profit TD Richard Boyd Barrett said he was “sick to the teeth” of seeing families facing homelessness present to his constituency office.

The activists ended the sit-in protest after a representative for Minister for Housing Eoghan Murphy confirmed the Minister would meet with several individuals from the housing coalition next week.