Mother and son hope their illegal adoption case helps others 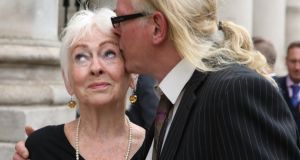 Tressa Donnelly Reeves receives a kiss from her son, Paddy Farrell (also known as André Donnelly), at the Four Courts on Thursday after the announcement of a settlement of their High Court action. Photograph: Collins Courts

The mother and son at the centre of a High Court action over his illegal adoption 57 years ago – which was settled on Wednesday following talks – hope the outcome of their case will encourage others in similar situations to act.

In a statement on Thursday on the steps of the Four Courts in Dublin, Tressa Reeves, standing with her son Patrick Farrell, aka André Donnelly, said, “I sincerely hope the outcome of this case will have encouraged other people in similar situations to me to act as I did.

“Hopefully the authorities will support and assist them.”

Following a four-day hearing, the court was told on Wednesday the parties had reached a comprehensive agreement.

Mrs Reeves, nee Donnelly, and her son had sued the State and St Patrick’s Guild (Incorporated) adoption society which was run by the Sisters of Charity.

It arose out of her long search for him following his illegal adoption after she gave birth to him at a Dublin clinic on March 13th, 1961.

Days later, he was placed with a family at Liscolman, Tullow, Co Carlow, and given the name Patrick Farrell by the now deceased couple, Jim and Maeve Farrell.

Mrs Reeves spent decades looking for him before they were reunited in 2013.

Her son did not know he was illegally adopted until late in 2012 some months after the death of his adoptive mother, Maeve Farrell.

Mrs Reeves, now living in Cornwall in England, claimed that in her search, she was given the “brush-off” by St Patrick’s and others in authority when she sought to make contact with him.

In his statement today, their solicitor, Neil Cosgrave*, said it had been “a long and harrowing” process. Tressa had given her son the exotic name of André “in the hope it would make it easier to find him in the years to follow”.

She wrote innumerable letters in the 1970s and began in earnest to search for information about his wellbeing, welfare and whereabouts.

“Over the following four decades, she encountered road blocks and obstacles which would have made most people give up but she refused to give up and take no for an answer,” Mr Cosgrave said.

They were reunited only in 2013 having missed out on so many of each other’s important life events. “But I am happy to say they formed an immediate, strong and close bond,” he said.

In her statement, Mrs Reeves said when her search began, mankind had not even landed on the moon. While there have been many changes, owing to advances in technology, “things haven’t changed for the men and women and children affected by illegal adoption, some of whom don’t even know their own identity”.

She said that in October 2009, when Patrick was 47, she went from Cornwall, where her eldest daughter Miranda was in a hospice suffering from terminal cancer, to Joyce House in Dublin (the Registry of Births Marriages and Deaths) to collect her son’s birth certificate.

“On my return to England, I showed the birth cert to Miranda. Unfortunately, Miranda never got to meet her brother before she passed away.”

At that stage, she said, she had already written to the authorities to speed up the reunion with her son but “to no avail”.

She hopes others in similar situations will be encouraged to act as she did.