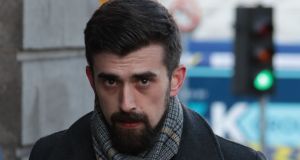 Luke Morrison who is facing a total legal costs bill estimated at more than €1m after a High Court jury found he was not unlawfully assaulted outside a bar in Limerick city by two off duty gardaí. Photograph: Collins Courts

A man is facing a total legal costs bill estimated at more than €1 million after a High Court jury found he was not unlawfully assaulted outside a bar in Limerick city by two off duty gardaí who had travelled from Dublin for a Christmas night out.

Mr Justice Bernard Barton said the jury verdict in the case of Luke Morrison meant the jury accepted both gardaí – David Naughton, with an address in Lucan, Co Dublin, and Wesley Kenny, from Sandyford, Co Dublin – were threatened by Luke Morrison and/or his brother James Morrison on December 5th 2013 with serious harm and robbery and that the officers had acted lawfully as gardaí.

The jury was unable to reach a verdict on a separate action by James Morrison over the same incident and his case has been adjourned to the next High Court jury list.

Both gardaí were previously acquitted by Limerick District Court of charges of assault arising from the December 5th 2013 incident. A subsequent disciplinary hearing resulted in no disciplinary action being taken against them.

After deliberating for more than seven hours following a 14 day hearing, the jury delivered their verdict on Thursday evening in the case of Luke Morrison.

In answers to questions, they decided Luke and/or James Morrison had threatened serious harm and/or threatened David Naughton and/or Wesley Kenny with robbery at Cecil Street, Limerick on December 5th 2013 but not at Catherine Street Limerick on the same date.

They found David Naughton and/or Wesley Kenny first identified themselves as gardaí before, and at, the commencement of a physical altercation at Catherine Street on December 5th 2013 and that both gardaí used reasonable force for the purposes of detaining the brothers until local Limerick gardaí arrived.

Both brothers brought their cases against the two gardaí as well as the Garda Commissioner and State.

All the defendants denied the claims but the two gardaí were later separately represented by Mark Harty SC, instructed by solicitor Martin Moran, after the Garda Commissioner/State, represented by David McGrath SC, adopted the position they were not liable for alleged actions of off duty gardaí.

Both sets of defendants also claimed indemnity/contribution against the other in the event of any liability being found.

Luke Morrison claimed he and his brother were walking near the junction of Catherine and Cecil Street when the defendant gardaí began to follow them. He claimed David Naughton grabbed his arm, tried to twist it, he tried to resist and Mr Naughton then tackled him to the ground and assaulted him. A Garda badge was shoved into his face and he was told: “Don’t f**k with the guards”, he claimed.

James Morrison alleged he questioned the defendant gardaí about his brother’s arm being twisted and was himself then grabbed by Wesley Kenny, pulled to the ground and assaulted. He claimed he was told: “I’m a guard, you don’t know what you are in for” and to: “Stop resisting.”

Both brothers were taken to Limerick University Hospital emergency department by local gardaí who arrived on the scene. They claimed they suffered facial and other injuries and were diagnosed with post traumatic stress disorder.

Both gardaí denied the claims. It was pleaded they were aggressively encountered by the Morrisons, their wallets were demanded and that Luke Morrison had been seen earlier coming out of his apartment with a knife.

They pleaded they acted lawfully at all times towards the brothers, identified themselves as gardaí and lawfully restrained and detained them until local gardaí arrived.

Following the verdict, Mr Justice Barton ruled all of the defendants were entitled to their costs of the Luke Morrison case. The costs of the James Morrison case will depend on the ultimate outcome of that case.

On the application of Mr Harty, who expressed doubts about the prospect of recovering costs from Luke Morrison, the judge ordered the State to pay the gardaí’s legal costs with an order over those against Luke Morrison, meaning the State pays the gardaí’s costs pending recovery against Mr Morrison

Mr Harty said gardaí, by the very nature of their employment, are exposed to cases like this and his clients were acting at all times in line with their membership of the Garda.

Granting the application, Mr Justice Barton said it followed from the jury verdict these two officers were at all times acting within powers conferred on them by the Garda Síochána Act even though they were off duty.