High Court told Independent TD misappropriated some €372,000 from his own firm in 2002 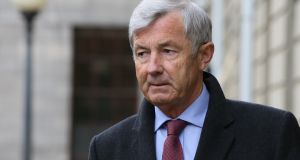 The Revenue Appeals Commissioners clearly found that Independent TD Michael Lowry misappropriated some €372,000 from his own company in 2002, lawyers for the DPP have told the High Court.

The matter had “shades of Father Ted”, Remy Farrell SC, for the DPP, said. The court should cast “ a very jaundiced” eye on Mr Lowry’s argument there was “nothing to see here”, this was “just a mistake and we should all move on”.

Mr Farrell said Mr Lowry has, in this case aimed at stopping his trial on tax charges, asserted that, following a Revenue Appeals Commissioners hearing last year, he has no personal tax liability, any corporate tax liability was self-corrected and the outstanding liability was a “very modest” surcharge of €2,410.

The original Revenue assessment was raised on foot of a diversion by Mr Lowry of monies due to his company Garuda for his own use, counsel said. The Appeal Commissioners had considered he had in fact misappropriated monies from his company.

While Mr Lowry claims he had in 2007 self-corrected and self-declared the “very peculiar” 2002 transaction involving diversion of €372,000 due to Garuda to an account in the Isle of Man, he “did anything but”, counsel said.

When Mr Lowry sought to reintroduce the monies back into Garuda in 2007, he knew full well they were not earned the previous year and effectively sought to “layer” them back into the company, counsel added.

Mr Lowry then “stayed silent” until the “Lowry tapes” about the transaction came into the public domain and sparked a Revenue investigation, Mr Farrell said. Mr Lowry did not even tell his accountant about the nature of the 2002 transaction, he added.

There was the “clearest evidence” a bogus invoice was generated to cover up what had happened and to suggest the money at issue was earned in 2006, he added. The proposition Mr Lowry had self-identified and self-corrected the matter, there was no harm arising from the transaction and there could be no prosecution was “simply incorrect”.

It was unclear what happened to the money between 2002 and 2007 and whether it was “simply resting” in the account, as either Fr Ted or Fr Dougal had said, counsel added.

Garuda had ended up paying a Revenue assessment for some €38,000 corporation tax, he said.

Leaving aside other issues including questions of bogus invoices, it was quite clear there was at least a very substantial underpayment of corporation tax, counsel said. Mr Lowry was saying “nothing” about that in these proceedings.

Mr Lowry denies charges of allegedly filing incorrect income tax returns for the year 2002 and of conniving in the alleged delivery by his company Garuda of incorrect corporation tax returns for the years ending 2002 and 2006. He also denies a fifth charge, brought under provisions of the Companies Act, of wilfully causing a company to failing to keep proper books of account between August 28th, 2002 and August 3rd, 2007.

The transaction which gave rise to the prosecution involved a €372,000 payment, due to Garuda by a Finnish company, Norpe OY, which, on the direction of Mr Lowry, was paid into an Isle of Man trust account nominated by Omagh accountant Kevin Phelan.

In arguments earlier, Patrick Treacy SC, for Mr Lowry, argued his client was being unfairly penalised by the DPP’s decision his trial should be moved from Tipperary to Dublin. That decision was entirely based on Mr Lowry’s electoral success and nothing else, he said.

The DPP was essentially saying you cannot trust a jury in Tipperary not to heed their oath to give a fair verdict in accordance with the evidence or heed warnings of a trial judge concerning conduct of the trial. This was a “dangerous proposition” and the issue whether or not people in Tipperary vote for Mr Lowry could not be a consideration in deciding to transfer.

Arguments on behalf of Mr Lowry in 2013 he had no tax liability and Garuda had a €38,000 liability - since paid - had been “vindicated”, counsel said. He was not suggesting Revenue officers acted in bad faith but all had operated on the basis Mr Lowry and his company had a global tax liability of some €1 million.