Application for case fast-tracking adjourned to facilitate bid for resolution 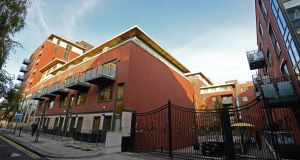 More than 600 residents of the 298 apartments at Longboat Quay are affected by fire safety notices which empower Dublin Fire Brigade to evacuate the complex should it consider such a step necessary. File photograph: Dara Mac Donaill/The Irish Times

The Longboat Quay Management Company has initiated legal proceedings over liability for funding fire safety works costing of some €3.5 million at the Dublin apartment complex.

An application to have the case fast-tracked has been adjourned to facilitate efforts to resolve matters, the Commercial Court heard.

More than 600 residents of the 298 apartments at Longboat Quay are affected by fire safety notices which empower Dublin Fire Brigade to evacuate the complex should it consider such a step necessary.

The complex was developed in 2006 by Gendsong Ltd, a company of developer Bernard McNamara, which later went into receivership.

Among the management company’s claims is that the Dublin Docklands Development Authority (DDDA) was obliged, under a December 2004 agreement, to ensure works at the complex were completed in a manner that left it reasonably fit for immediate occupation. It is alleged the DDDA failed to do this.

It is also alleged both the DDDA and Gendsong are obliged to indemnify the management company for all costs, losses, and claims resulting from defects in the design, construction or certification of the development, or any losses due to lack of insurance, or underinsurance, of the development.

Fire safety concerns over the apartment complex date back to 2007, when the fire brigade attended at the property and notified one or more residents the fire alarms were not loud enough, the management company claims.

There was also extensive contact about fire safety with Dublin City Council and other parties over the years, particularly between 2009 and 2011 and from 2014, it was stated in court documents.

The management company said it was later told it must fund remedial works at a cost of more than €3.5 million, adding it cannot do so.

It is not disputed fire safety works should be carried out as “a matter of urgency”, the company says. It disputes it has liability for those works and has appealed the notices served on it.

An application by the company to have its proceedings fast-tracked by the Commercial Court was adjourned on Friday to November 9th on consent of the sides.

Patrick Leonard SC, for the company, said the adjournment was to allow for further discussions.

This matter affected the lives of many people, should be resolved as soon as possible and requires a number of parties to resolve matters, counsel said. All the sides have agreed to try and resolve it by early November, he added.

Counsel for the DDDA supported the application to have the matter put back. His side would resist the claims against them, counsel indicated.

The case is against the DDDA, Gendsong Ltd and two receivers, Declan Taite and Anne O’Dwyer, who were appointed over some assets - 15 apartments - belonging to Gendsong.

The claim against the receivers alleges they are not entitled to sell the 15 apartments arising from the alleged failure of Gendsong to meet its obligations under a lease of 2003.

The management company is seeking various declarations and orders, including reliefs arising from a lease dated 2003 and made between the DDDA, Gendsong and Michael McNamara & Company.

It is alleged Gendsong has failed to comply with alleged obligations to procure warranties concerning the apartment complex in favour of the management company from the contractor, designers and sub-contractors with design responsibilities.

It is also alleged Gendsong failed to ensure the development was carried out and completed in a good and workmanlike manner, particularly in relation to compliance with all reasonable requirements of the fire authority.