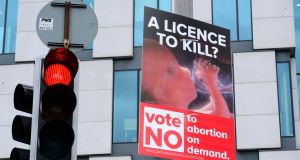 The Government is opposing a Belfast student’s legal attempt to allow Irish citizens in Northern Ireland to vote in next month’s referendum on the Eighth Amendment to the Constitution of the Republic.

Róisín Morelli, who is claiming in the High Court that they have a constitutional right to take part in such polls, is seeking a judicial review before the referendum, on May 25th. The Government says it is inappropriate to deal so quickly with such a far-reaching matter involving the electoral Acts.

On Monday Mr Justice Seamus Noonan fixed next Friday for hearing Ms Morelli’s application. He will also address the State’s application for the case to go to plenary hearing rather than to judicial review.

The judge said it seemed “close to impossible” that the matter could be dealt with “to finality” in the six weeks before the referendum – which if passed will allow abortion until the 12th week of pregnancy – given that the case would probably have to go on to the Supreme Court.

It seemed a “very tall order” to meet Ms Morelli’s application to be allowed to vote on May 25th, he said, adding that, although he took into account her argument that not resolving the case by May 25th could have implications for the validity of the referendum result, the court had no control of that issue.

Ms Morelli’s barrister, Conan Fegan, also argued that the case involved cross-Border health issues and entitlements under the Belfast Agreement. Mr Justice Noonan said that enfranchising more than a million people was “not the work of a moment” .

Conor Power SC, for the State, argued that May 25th was an “impossible deadline” for the case. A central point in it, he said, was the residency requirement for citizens to be allowed to vote not only in referendums but also in Dáil and presidential elections. Electoral Acts could not be changed “on the hoof”, he claimed. He also argued that Ms Morelli had significantly delayed bringing her challenge.