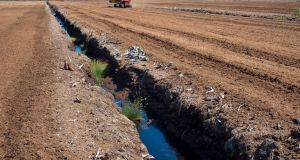 Friends of the Irish Environment (FIE) had argued the January 2019 regulations gave large scale projects an “enforcement holiday”, contrary to EU law, from obligations to comply with two EU directives which should have been implemented decades ago.

The injunction applies pending the determination of a challenge, for hearing in early September, by FIE to the validity of the Planning and Development (Exempted Development) Regulations 2019.

Those were introduced last January in the wake of a decision by An Bord Pleanála, upheld by the High Court, that large scale peat extraction is not exempt development and requires planning permission.

In a judgment on Tuesday, Mr Justice Simons said the injunction restraining the regulations coming into effect would ensure the existing situation, under which unauthorised peat extraction is amenable to enforcement measures under the Planning and Development Act 2000, is maintained.

He refused FIE’s application for a wider injunction aimed at restraining implementation of the proposed new licensing regime for peat extraction.

Because that regime will not come into full effect for another 18 months, by which time the legal challenge will have been decided, he considered such an injunction at this stage would be “overbroad”.

The judge also observed that FIE’s grounds of challenge to the regulations appear “very strong” and the State respondents, at this stage, had not disclosed an arguable defence to the grounds.

FIE, represented by James Devlin SC and Oisin Collins SC, with Margaret Heavey BL, instructed by O’Connell Clarke Solicitors, contends the regulations disapply existing domestic laws intended to ensure compliance with the requirements of the Environmental Impact Assessment (EIA) and Habitats Directives, which should have been implemented here in 1988 and 1994 respectively.

FIE argued the regulations are contrary to EU law as they suspend the obligations to comply with the directives for a temporary period in the case of peat extraction projects extending beyond 30 hectares.

A letter from the EU Commission last April, expressing concern about the further delay here in applying the EIA directive, was exhibited by the FIE.

The grounds of challenge predicated on alleged breach of the directives would appear to be very strong, the judge said.

The regulations purported to exempt, with immediate effect, large scale peat extraction projects from existing laws implementing both directives when the replacement development consent procedure will not be fully in force for a significant period thereafter.

Unlicensed peat extraction may thus be carried out without any risk of enforcement action, which appears to involve, prima facie, breaches of certain provisions of both directives, he said.

It cannot be said, at this stage of the case, the State respondents have disclosed an arguable defence to these grounds of challenge, he said.

On existing evidence and arguments, the State had not indicated how it intends to justify the wholesale exemption, albeit for a temporary period only, of large scale peat extraction projects from compliance with EU directives to have been implemented by June 1988 and May 1994.

That was not to say the State respondents might not ultimately succeed at the trial of the action, he said. The State might, he said, well persuade the court at the full hearing the temporary disapplication of the obligation to comply with the EIA directive, three decades after its implementation date, was justified by the “exceptional circumstances” of peat extraction. At this stage, it was not obvious the State had an arguable defence.

He also considered the alleged breach of EU environmental law, if well founded, would represent an “especially serious” breach of Ireland’s obligations as a member state of the EU.

If the FIE case was well founded, refusal of an injunction would mean unlicensed peat extraction would have been allowed to continue during the summer harvesting period in breach of both directives, he said.

For all those reasons, he granted the injunction. Because a court order suspending the operation of legislation, even secondary legislation, was “highly unusual”, he directed the full hearing take place in September.