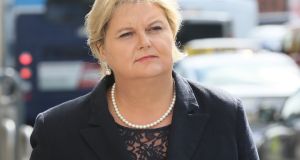 Former Rehab chief executive Angela Kerins is seeking to extend the control of the courts over parliamentary proceedings in a “very significant and wholly unprecedented” way, lawyers for the Dáil Public Accounts Committee have told the High Court.

Ms Kerins’ case against PAC, including her claim for damages, is “absolutely unique” in seeking to alter the basis of the constitutional separation of powers between the courts and legislature and is “misconceived”, Paul Gallagher SC, for PAC said.

While PAC is conscious of, and sympathetic to, the serious difficulties experienced by Ms Kerins as outlined by her in a sworn statement to the court, it does not accept any responsibility for those, he said.

The nub of her case is a claim the courts have some “oversight function” concerning Dáil debates and, if somebody’s good name is impugned, can intervene to edit the Dáil record and ultimately support some claim for damages, he said.

The right to one’s good name, while of very significant importance, does not trump other provisions of the Constitution, including those guaranteeing the Oireachtas’ right to freedom of speech and debate and to non-amenability over any utterances made in the Houses.

It was also of significance that Ms Kerins had voluntarily attended before PAC on February 27th, 2014, he said.

If Ms Kerins claims were upheld, that meant “speech is not free any more” but is subject to the rider, if some line is exceeded, there is a liability.

This was the fundamental premise of Ms Kerins case despite it being presented as a more “simple” matter.

The court had heard long extracts from transcripts of the PAC hearings so it would hear what members said but the process before PAC was consistent with the “absolute privilege” provided for in Article 13 of the Constitution which provides no member of the House shall, in respect of any utterance in either House, be amenable to any court or any authority other than the House itself.

“What you are being asked to do is make them amenable,” counsel said.

Another “oddity” in this case was that statements were made outside the House about this matter but no action was taken about those, he said.

There is a remedy to protect one’s good name but no remedy for utterances in the House.

Ms Kerins claims go to the heart of the parliamentary function, he said.

PAC has existed as a parliamentary institution since 1695 and the need for its existence derives from the constitutional requirement for the Dail to make government accountable and answerable for its expenditure.

Mr Gallagher has begun outlining PAC’s response to complaints by Ms Kerins over its conduct of public hearings on February 27th and April 10th 2014 concerning payments of public monies to the Rehab group.

Ms Kerins alleges both hearings were unlawfully conducted and caused her to suffer personal injury, loss of reputation and loss of career.

PAC denies her claims, denies it conducted itself unlawfully, showed bias towards her or was guilty of misfeasance in public office. It also denies it is a fact-finding committee and pleads its hearings were in the public interest.

The hearing before the President of the High Court, Mr Justice Peter Kelly, Mr Justice Seamus Noonan and Ms Justice Isobel Kennedy is aimed at establishing the extent of PAC’s jurisdiction to conduct the hearings before other issues, including any liability to damages, are addressed.

Earlier today, the court finished viewing a video extract of part of the April 10th hearing during which a Rehab delegation was questioned by the Committee. Ms Kerins did not attend that hearing due to ill-health.

The court also heard a recording of an interview with Independent TD Shane Ross on RTE’s Morning Ireland in which he said PAC had received legal advice it could not compel Ms Kerins and former Rehab CEO Frank Flannery to appear before it.