Judgment in Denis O’Brien v RTÉ to be published Wednesday 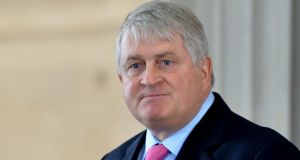 A judgment outlining the reasons why Mr Justice Donald Binchy granted a temporary injunction to businessman Denis O’Brien against RTÉ is to be published on Wednesday. Photograph: David Sleator

A judgment outlining the reasons why Mr Justice Donald Binchy granted a temporary injunction to businessman Denis O’Brien against RTÉ is to be published on Wednesday.

The judge ruled on May 21st that the broadcaster could not publish details in its possession of Mr O’Brien’s financial dealings with the Irish Bank Resolution Corporation, but did not publish his reasons pending a decision on redactions of any sensitive information.

On Tuesday morning, Mr Justice Binchy expressed the view that, given what was now in the public domain, following information shared on the Dáil record by Catherine Murphy, it seemed there was no purpose served by any redaction.

However, counsel for Mr O’Brien said his client was seeking some redactions.

Conor Lehane BL, for Mr O’Brien, outlined the redactions required in detail on Tuesday afternoon. He said the court had been minded to grant the injunction and should only allow in material Ms Murphy had put on the Dáil record.

David Holland SC, for RTÉ, said one would have to be in a “hermetically sealed ivory tower over the last few days” not to be aware of the avalanche of information now out there.

It was very clear Ms Murphy, for good or ill, had put into the public domain very simple pieces of information and where she had, there was no purpose in redaction.

He said Mr Lehane’s submission had no relationship to the reality in which the court and the public found themselves. The exercise was “divorced from reality,” he said.

He went through the requested redactions and argued against them. He also read into the record a public statement issued by James Morrissey, on behalf of Mr O’Brien, in the aftermath of Ms Murphy’s Dáil comments, in the context of its effect on the judge’s decision to make redactions. He criticised Mr O’Brien for what he said was an attempt to suppress certain information.

Mr Lehane objected to his client’s statement being introduced and said it was not “properly” before the court. He also said the suggestion he was trying to “suppress” or that he engaged in nefarious activity was “wholly unwarranted”.

“Alice in Wonderland would find it difficult to adequately represent this situation,” Mr Holland responded.

Mr Justice Binchy said he would issue his judgment, to include any redactions, before lunch on Wednesday.