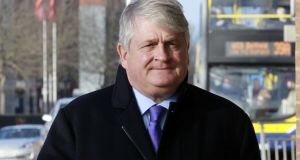 Denis O’Brien alleged two TDs ‘clearly disregarded’ separation of powers between parliament and the courts when they respectively made statements in the Dáil. Photograph: Collins Courts

A High Court judge said she hopes to rule next month on the action by businessman Denis O’Brien over statements made in the Dáil about his banking affairs.

Ms Justice Ní Raifeartaigh had said last week she did not consider it necessary to hear submissions from the O’Brien case parties on the Kerins decision. However she was prepared, on further reflection while considering the Kerins judgment, to consider any further submissions the parties wished to advance, the judge said.

Eileen Barrington SC, for Mr O’Brien, and Sara Moorhead SC, for the Dáil parties, said they would provide written submissions by March 6th.

The judge thanked the sides and said she hoped to give her judgment in March.

After Mr O’Brien’s case concluded last December, Ms Justice Ní Raifeartaigh said she would not finalise her judgment until the High Court had ruled on the case of Ms Kerins.

Her case was taken over the conduct of two Dáil Public Account Committee hearings in 2014 concerning payments of public monies to Rehab. A three judge High Court in late January dismissed Ms Kerins’ case, which had raised similar issues relating to the privilege attached to “utterances” in the Oireachtas.

Mr O’Brien’s lawyers last week had his case listed for mention before Ms Justice Ní Raifeartaigh for the purposes of asking if the court required further submissions from the sides in light of the Kerins’ case decision.

The judge herself relisted the case on Wednesday when she said she would accept further submissions.

Mr O’Brien’s case is against the Clerk of the Dail and the State. Legal costs are expected to exceed €1m and liability for those will be decided after judgment is delivered.

The businessman has alleged Social Democrats TD Catherine Murphy and Sinn Fein TD Pearse Doherty “clearly disregarded” the constitutional separation of powers between parliament and the courts when they respectively made statements in the Dáil in May and June 2015.

He claimed the statements, made while he had High Court proceedings against RTÉ seeking to restrain it publishing details of his banking relationship with State-owned Irish Bank Resolution Corporation (IBRC), amounted to “unwarranted interference” in the judicial domain.

He also argued the Dáil Committee on Procedure and Privileges (CPP), which rejected his complaints over the statements, failed to “properly police” the TDs over their statements.

The respondents’ core argument was that the court, as a result of article 15 of the Constitution, has no jurisdiction to intervene. They argued article 15.13, which states members of the Oireachtas are not amenable to any court or authority other than the Houses themselves for “utterances” in the Houses, effectively confers “absolute” immunity from suit over such utterances.

They also argued, if Mr O’Brien wins, that would greatly restrict Dáil speech into the future. Mr O’Brien, the sole witness in the case, told the judge he wanted the court to censure both TDs over their statements and to lay down a line beyond which Dáil deputies cannot go.

Both TDs acted “recklessly and maliciously”, he hoped this would never happen again and his case “will change things for the future”, he said.