Businesswoman took proceedings against her partner over sale of Killegy House 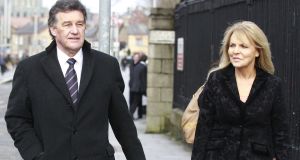 Jackie Lavin’s High Court action against her partner Bill Cullen and one of his companies over an alleged failure to complete a €1 million deal for the sale of Killegy House in Co Kerry to the businesswoman has been resolved.

The case was listed for hearing before Judge Paul Gilligan at the High Court on Wednesday, but was adjourned to allow talks between the parties.

On Thursday morning, the court was informed by Bernard Dunleavy SC for the company that the case had been resolved and on consent could be struck out.

The judge agreed to strike out the case, which was expected to run for several days had talks between the parties failed to bring about an agreement.

No details of the settlement, which is understood to be confidential, were given in open court.

In her proceedings, Ms Lavin, who says she is in a committed relationship with Mr Cullen, claimed Killegy House was her home.

She claimed Ulster Bank created a charge over Glencullen’s assets in 1999, including Killegy House.

In 2009, Glencullen sought additional credit facilities from Ulster Bank allowing it to continue to trade during the downturn.

The bank, she claimed, was unwilling to do this unless €1 million was invested in the company.

Following the sale of a property they had in Florida for $7.25 million (about €6.2 million), Ms Lavin said she agreed to advance Mr Cullen the €1 million so he could pay down Glencullen’s liabilities.

As part of the arrangement, she claimed Killegy House was to be sold to her. However, she claimed there was a failure to complete the sale of the property to her.

She claimed she suffered loss and damage as a result of being deprived of the opportunity to buy the house.

After the company was placed in receivership, it secured an order from the Residential Tenancies Board requiring her to leave Killegy House.

In her action, she sought an order for the sale of Killegy House to her.

She also sought an order prohibiting the defendants from entering into any contract for sale of the property other than with Ms Lavin.

Glencullen Properties denied all the claims and argued that Ms Lavin was not entitled to any of the orders she sought.

In its defence, the company said it accepted Ms Lavin had agreed to advance Mr Cullen €1 million so he could loan Glencullen funds to reduce its liabilities.

However, the company denied the monies were advanced as part of an agreement to sell Killegy House to Ms Lavin or that it agreed to sell her the premises.

On Wednesday, a lawyer for Mr Cullen told the court that Mr Cullen was not defending the proceedings and that he was supporting Ms Lavin.