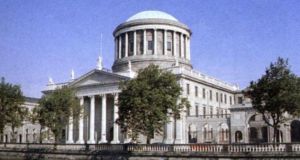 The High Court has overturned a €50,000 defamation award made to a Dublin man against the operators of a shop whom he alleged placed a picture of him on the shop’s front door with the words “Attention Shoplifters”.

Maxela Ltd, operator of a retail unit in Tallaght Village called Rasputin in 2011 but now trading under a different name, appealed against the award, made by Dublin Circuit Court after a judge found Karl Morrison had been defamed.

The President of the High Court, Mr Justice Nicholas Kearns, ruled Mr Morrison had not proven his claim of defamation and the court had no option but to strike it out.

Mr Morrison claimed he was defamed in June 2011 when he saw his picture attached to the front door of the store, which sold goods and foods from eastern Europe. He said the picture was brought to his attention by two of his uncles.

Mr Morrison (23), who the court heard was never in trouble with gardaí, claimed he asked staff at the shop for the poster, described as being slightly bigger than A4 in size, to be taken down but it was still there about a month later.

Mr Morrison said, after his picture was posted, he had to leave his address at Kilmartin Park, Fettercairn, Tallaght as people were making adverse remarks about him. He also claimed he had difficulties obtaining employment in the area. He now lives in hostels, the court heard.

Maxela Ltd denied the claims. A director of the company, Max Bulgakov told the court the store never put up posters of Mr Morrison or anybody else.

In his ruling, Mr Justice Kearns said, in a case with “many twists and turns”, he had to decide the issues on the evidence put before him and was satisfied Mr Morrison failed to discharge the onus of proof required to prove his claim against the company.

Evidence tendered on behalf Mr Morrison, who was “confused” about certain matters when giving his evidence, lacked credibility, the judge said.

Mr Morrison had told the court he used his mobile phone to take pictures and a video clip of the poster in the shop and shown the picture to his solicitor, the judge said.

Mr Morrison lost the phone before he got the video or images printed or downloaded, his solicitor Jillian O’Shea told the High Court she had no recollection of seeing the image and her evidence was not put before the Circuit Court, he added.

Evidence was given by several parties on behalf of the defence no posters were present on the door at the relevant time, the judge said.

He could not be sure what exactly had happened and would dismiss the case with no order for costs of the two day hearing, Mr Justice Kearns concluded.