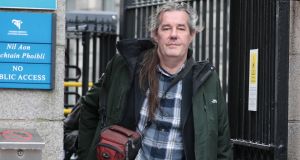 A High Court jury has dismissed claims by a man that he was assaulted by a Garda during a Shell to Sea protest in Co Mayo.

The protest, held on August 20th, 2011, was intended to frustrate the approach to the Shell refinery entrance of a vehicle convoy, lead by a tractor, on the public road at Glenamoy, near Belmullet.

A video recording of the protest was shown during Raymond Hanrahan’s case against the Garda Commissioner and State.

Mr Hanrahan (50), with an address at Fairhill, Cork, had claimed he was unlawfully arrested and falsely imprisoned on August 20th, 2011 for about three hours before being released having been charged at Belmullet Garda station with criminal damage to a high vis Garda jacket. He also alleged malicious prosecution. The claims were denied.

Arising from the evidence and rulings during the four-day case, the jury was asked to decide two questions.

The first asked whether Mr Hanrahan was assaulted by Garda Justin Browne, by being pushed out of the way when Mr Hanrahan entered the middle of the road to attempt to block the tractor.

In a verdict delivered on Thursday afternoon after more than three hours deliberation, the jury answered no to that question with the effect they were not required to proceed to the second question which would have involved assessing damages.

Mr Justice Max Barrett thanked the jury for their service and discharged them.

The judge then heard submissions on Mr Hanrahan’s additional claim that he was maliciously prosecuted for criminal damage.

Mr Hanrahan’s District Court conviction on that charge was overturned by the Circuit Court after Garda Browne, who in 2011 was temporarily stationed in Belmullet from Drumlish Garda station, accepted the high vis jacket produced in the District and Circuit Courts was the incorrect one and he did not know the whereabouts of the correct one.

Desmond Dockery SC, for Mr Hanrahan, argued those and other factors, including the absence of any evidence the high-vis jacket was ripped or torn, amounted to more than negligence and constituted malicious prosecution.

Colm Smyth SC, for the defence, said there was a “reasonable and proper” cause for the prosecution on a criminal damage charge. What happened later was that Garda Browne unfortunately arrived in court with the wrong jacket and that was negligence but was not malicious as there was “no evil intent”, he argued.

Mr Justice Barrett will rule on the malicious prosecution claim on a later date.

In his evidence during the case, Mr Hanrahan said his ponytail was gripped from behind and he was pulled to the ground by several gardaí about 1.20pm on August 20th, 2011 after he had removed an epaulette, containing an identification number, from the right shoulder of the high-vis jacket of Garda Browne.

He said Garda Browne had earlier pushed him roughly, he wanted to get his number for the purpose of making a complaint and he had not torn or damaged the high vis jacket.

In cross-examination, Mr Hanrahan agreed he had not made a complaint of injury when he was in Belmullet Garda station. He disagreed the task of gardaí at the Shell protests was to keep the peace and described them as “agents of Shell”.

In his evidence, Garda Browne said an epaulette was forcibly removed by Mr Hanrahan from his high vis jacket, he had gone after Mr Hanrahan to recover it, arrested Mr Hanrahan for the offence of criminal damage and cautioned him.

He agreed in cross-examination the high vis jacket is no longer available and he had not followed the chain of custody rules concerning evidence. He denied he had pushed back and assaulted Mr Hanrahan using excessive force and had no reasonable suspicion for arresting him on a criminal damage charge.