Receivers appointed over buildings to move against people allegedly squatting there

A number of people have been injured following a stand-off at a squatted property on Grangegorman Road Lower, in north Dublin. Video: Dan Griffin 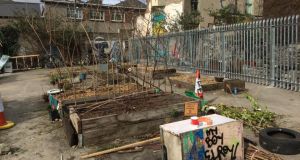 A yard at the site of a squat at Grangegorman in Dublin. The High Court will on Wednesday hear an application for an injunction to prevent alleged trespassing at the site. Photograph: Dan Griffin.

The High Court will on Wednesday hear an application for an injunction to prevent alleged trespassing on a number of properties in Grangegorman, Dublin.

It follows alleged incidents at the complex in Lower Grangegorman, off Brunswick Street, on Monday.

Lawyers for receivers appointed over three houses at the complex have secured permission to serve at short notice papers saying they will seek the injunction against a number of people alleged to be squatting on the premises.

Mr Justice Paul Gilligan is also expected to be asked for similar permission to serve papers at short notice in relation to a fourth property at the site.

The applications follow incidents on Monday at the complex when workers arrived to erect fences on the property but were met with resistance from a number of people who have been allegedly squatting there for some time.

There was an incident on Monday night when the workers tried to remove their vans from the property and garda reinforcements were called.