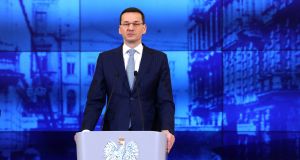 Senior Warsaw judges have described as a “nuclear bomb” the High Court’s refusal to extradite a Polish man over fears judicial reforms there have undermined the independence of courts and threaten the rule of law.

As Poland “appears no longer to accept that there are common European values which must be respected”, Justice Donnelly said she would formulate a question next week seeking clarification from the Luxembourg court.

Andrzej Rzeplinski, until 2016 the president of the constitutional tribunal and leading critic of the government reforms, welcomed the High Court intervention.

“This is extremely significant because this is the very first case of this type in the history of the European Union,” said Mr Rzeplinski to The Irish Times. “The ECJ is the only court which can decide this very important question . . . and resolve this tragic situation.”

Another ex-constitutional tribunal justice, who asked not to be named, described the High Court referral as a “nuclear bomb and a good day for the rule of law”.

After securing an absolute majority in the October 2015 general election, PiS made contested appointments to the constitutional tribunal, Poland’s highest court, and changed its operating procedures. Other sweeping changes followed at the supreme court and regional courts, while new judicial appointments procedures give politicians greater influence.

The government says the reforms were crucial to streamline the legislative process by overhauling structures unchanged since the communist era. But critical former justices, led by Mr Rzeplinski, have accused the government of creating “corps of politically obedient judges”.

In addition, the Polish government has overhauled the civil service, the police, the ombudsman and public broadcaster TVP.

Justice Donnelly said the merger of Poland’s general prosecutor with the justice minister suggested the rule of law was “systemically damaged”, with political influence over the judicial system facing Mr Celmer on extradition.

Poland has rejected EU criticism of its reforms as an unwarranted interference in its sovereign affairs. Last week in Brussels, Polish prime minister Mateusz Morawiecki suggested EU reform critics had only “random, fragmentary and partial information”.

A spokesman for Poland’s justice ministry, contacted on Monday evening, was unable to comment on the High Court decision.

Poland’s ombudsman, Adam Bodnar, a vocal critic of the judicial reform, said: “I am ashamed that we are in a situation in Poland that such questions are even being asked by a court of another member state.”

In December, the European Commission launched an unprecedented procedure against a “clear risk of a serious breach of the rule of law in Poland”.

It set a three-month deadline for Poland to address its concerns, which expires next Tuesday.