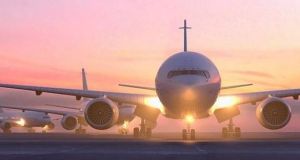 The man claims he was given his passport by airport staff two hours after the flight departed. File photograph: Getty

The Garda force has denied claims that gardaí abandoned a failed asylum seeker at an Ethiopian airport.

The man, who was deported from the State last March, claims he was unable to get a flight back to his home country because gardaí did not give him his passport. He claims that prevented him from boarding his flight to his home country in Southern Africa.

The man, who cannot be named for legal reasons, claims he has been living at the airport terminal ever since and has survived on charity from other passengers and what he can find in bins.

When the case came before Mr Justice Charles Meenan on Thursday, John Gallagher BL, for the Minister, said a statement has been sworn by one of the Gardaí who accompanied the man to Ethiopia which disputes the man’s version of events.

Counsel said the Gardaí say they provided the man with his passport, a boarding pass, and his possessions including his mobile phone.

Any failure by the man to get on the connecting flight was his own, counsel said. There was a three-hour gap between flights, and a flight itinerary supports the Garda’s version of events, counsel added.

The man claims that in March he was flown from Ireland to Ethiopia, via Belgium, in the company of members of An Garda Síochána overseeing his deportation to his home country.

He claims that while awaiting his connecting flight home the gardaí provided him with a boarding pass in the airport departure lounge.

He claims the Gardaí, who retained his passport, left the airport, but told him they would be back.

He claims he never saw the Gardaí again and that he was unable to board the flight to his home country because he had no passport, and cannot get home.

The man claims he was left in the terminal without money, a telephone or his luggage. He cannot leave the airport because he cannot buy a visa to enter Ethiopia.

He claims he was given his passport by airport staff two hours after the flight departed. He made contact with an Irish based NGO and his lawyers using computers located in the airport.

The matter is before the High Court because the man has not been able to progress a claim against the State.

His solicitor claims this is because the Minister requires the man to provide a letter signed by him giving the solicitor the authority to act on his behalf.

It is claimed the man cannot furnish the Minister a signed letter because he is on the airside of immigration control at the airport and has no access to postage facilities and that the Minister’s requirement is unlawful.

As a result, the man has brought judicial review proceedings against the Minister where he seeks an order quashing the Minister’s decision requiring the man’s solicitor to furnish a signed authority from the man.

He also seeks an order directing the Minister to reply to correspondence from the man’s solicitors.

The case has been adjourned to next month to allow the man and his lawyers consider and reply to the Garda’s affidavit.