Gardaí did not conspire to implicate Ian Bailey in 1996 murder, jury finds 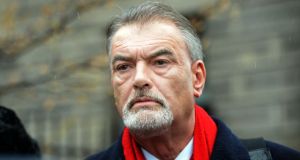 Ian Bailey leaving the High Court after losing his case over an alleged Garda conspiracy to implicate him in the murder of Sophie Toscan du Plantier. Photograph: Eric Luke/The Irish Times.

Gardaí did not conspire to implicate Ian Bailey in the murder of Sophie Toscan du Plantier, a High Court jury has found.

The seven men and four women took just over two hours to reach their unanimous verdict dismissing Mr Bailey’s civil action for damages over the conduct of the investigation into the murder of the French film-maker whose body was found near Toomore, Schull, on December 23rd 1996.

Having thanked the jury, Mr Justice John Hedigan said: “There has always been the shadow of the late Sophie Toscan du Plantier and her tragic senseless death in this case. It is a source of dismay and anguish in both Ireland and France that her killer has not been brought to justice. A beloved mother, wife and daughter, I do not want it thought that her life was forgotten here in this court.”

The judge said he was referring a transcript of Marie Farrell’s evidence in the case to the DPP for whatever action the Director might “deem appropriate”.

When retiring at noon to consider their verdict, the jury were given two questions to answer.

The first was: “Did Gardaí Jim Fitzgerald, Kevin Kelleher and Jim Slattery or any combination of them conspire together to implicate Mr Bailey in the murder of Sophie Toscan du Plantier by obtaining statements from Marie Farrell by threats, inducements or intimidation which purportedly identified him as the man she saw at Kealfadda Bridge in the early hours of December 23rd 1996, when they knew they were false?”

The second was: “Did Det Garda Fitzgerald and Sergeant Maurice Walsh conspire by threats, inducements or intimidation to get statements from Marie Farrell that Ian Bailey had intimidated her, when they knew they were false?”

Because they answered No to both questions there was no need to consider whether Mr Bailey had suffered loss entitling him to damages. Mr Bailey claimed damages, including exemplary damages, over the conduct of the investigation.

The case opened on November 4th and the verdict came on its 64th day. Evidence was heard from 93 witnesses, 21 called by Mr Bailey and 72 of behalf of the State.

Initiated in May 2007, the case involved claims of wrongful arrest, conspiracy, false imprisonment, assault and trespass against the person and intentional infliction of emotional harm. The defendants denied all the claims.

The judge had on day 62 granted a State application, made on day 60 in the absence of the jury, to rule out many of the claims, including wrongful arrest, on grounds they were either statute barred (brought outside the six year time limit for such cases) or else not actionable. Many of the claims related to events in 1997 and 1998, putting them outside the six year limit.

The judge left for sole exclusive decision by the jury what he described as the “central plank” of the case, whether there was a conspiracy by some gardaí to implicate Mr Bailey in the murder. Because of the allegation the conspiracy was continuing, that created a fresh cause of action bringing it outside the statute of limitations.

In the first recording, the two gardaí discussed various matters, including taping a planned visit by Mr Bailey to Ms Farrell in her shop in Schull.  In the second, Det Fitzgerald repeatedly expresses his annoyance and disappointment to Ms Farrell over her making a statement to Sergeant Maurice Walsh when she had said she was not making any statements.

During that call, Ms Farrell said she does not know “what all the hullabaloo is about”.

Earlier, in his charge to the jury, Mr Justice Hedigan said the “centrepiece” of Mr Bailey’s case is that gardaí set out to frame him for murder. The credibility of Marie Farrell and of a number of gardai was central to that claim and the onus of proof was on Mr Bailey to prove his case on the balance of probabilities, he said.

The jury could not give damages for the two arrests of Mr Bailey in 1997 and 1998 because those were lawful, the judge said. Nor could they award damages for loss of reputation because such claims must be made in defamation proceedings. They may consider the extent to which Mr Bailey contributed to his own name being known and should balance that against “the little village syndrome” as Schull was a village of just 750 people.

The jury could also not award damages relating to the extradition proceedings against Mr Bailey as those were in accordance with Ireland’s obligations under European mutual assistance procedures, he said.

Ms Farrell was central to Mr Bailey’s case and is “a most unusual witness”, he said. The claims that she made false statements rested squarely on her evidence and the jury should note she had at the outset said she had told lies during Mr Bailey’s 2003 libel actions having considered telling the truth then “as if that were an option” but had not done so, he said.

The judge recalled he warned Ms Farrell concerning perjury during her evidence and said that was “only a warning, not a conclusion” and the issue of Ms Farrell’s credibility was for them to decide.

Ms Farrell in this case asked the jury to believe she had for some eight years conspired to frame an innocent man for murder, he said. For much of that time, Ms Farrell was no longer fearful her husband would find out that she was out with another man on the night of December 22/23rd 1996 and her motivation was that gardai were doing favours for her family, he said.

After Mr Bailey’s lawyers complained Ms Farrell also said she was fearful and concerned she might be charged with wasting police time, the judge recharged the jury in that regard.

In considering the facts, the jury must be fair and objective and must be careful of a David and Goliath comparison between the sides as “Goliath has as much right to justice as David”.