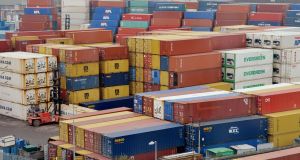 The Dublin Port Company said it feared a standstill of truck traffic in the immediate aftermath of Brexit if its plans for a truck park and inspection facility are delayed. File photograph: Alan Betson/The Irish Times.

A transport and warehousing firm has breached a court order by failing to vacate a site needed to deal with the impact of Brexit, the Dublin Port Company has claimed in the High Court.

As a result of the alleged breach, the State-owned port company is seeking orders that could result in the committal to prison of one of McQuaid O’Flanagan Warehousing and Transport Ltd’s directors and the seizure of that company’s property.

The port company had previously brought proceedings in the Commercial Court against a number of parties aimed at securing possession of a site at Tolka Quay, some 600m south of the Dublin Port Tunnel.

It intends to use the site as one a truck park and a customs, immigration, agricultural inspection post after Brexit.

The property had been mainly occupied by McQuaid O’Flanagan, which had a lease with the former owners of the site.

The port company bought the site in January and said McQuaid O’Flanagan’s lease on 3.7-hectare site expired in November. It had sought various orders against a number of parties that had been on the site, including one preventing McQuaid O’Flanagan trespassing or otherwise interfering with its right to take possession.

Those proceedings were resolved on consent in March and as part of that agreement, Mr Justice Robert Haughton made an order requiring the defendant to vacate the property in tranches. The site was to be fully vacated by McQuaid O’Flannagan by the end of last month.

The case returned before Mr Justice David Keane at Wednesday’s vacation sitting of the High Court when lawyers for the port company said McQuaid O’Flanagan was in contempt of the order made in March.

The defendant had not left the property and remained “in situ” and in correspondence, it said it would not be able to vacate the site until September.

The port company said it fears a standstill of truck traffic in the immediate aftermath of Brexit if its plans are hampered or delayed. Workers were due to start work on the site in the last few days, the court heard.

As a result of the defendant’s alleged breach of the High Court order, the port company sought an order appointing a receiver to sequester the property of both McQuaid O’Flanagan and of one of its directors, Gerald McQuaid. It also seeks an order for Mr McQuaid’s attachment and possible committal to prison.

The judge, on an ex-parte basis, granted the port company permission to serve short notice of the proceedings on the defendants and adjourned the matter to Friday.