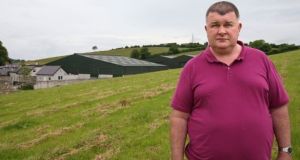 Farmer John Hoey rejected Mr Lehane’s claims in relation to shooting of the cattle and said he remains ‘haunted’ after witnessing the cattle being shot in July 2016. Photograph: Pat Byrne

The High Court has ruled the bankruptcy of a Co Monaghan farmer, who had a number of cattle shot by members of the Defence Forces, should be extended. In a judgment published this week, Ms Justice Teresa Pilkington ruled the bankruptcy of John Hoey, from Carrickmacross, should be extended over his lack of cooperation with the official in charge of his bankruptcy, Official Assignee Chris Lehane.

She invited further submissions concerning the length of the extension and said, if there was further cooperation by Mr Hoey with Mr Lehane, that could well determine the length of any extension. The matter is due back before the court next month.

Mr Hoey was declared bankrupt on foot of a petition brought by John Kelly Fuels Ltd for €262,000 in February 2016. He was due to exit bankruptcy 12 months later but remained a bankrupt pending the outcome of Mr Lehane’s extension application.

Represented by Bernard Dunleavy SC, Mr Lehane sought an order under Section 85 of the 2015 Bankruptcy (Amendment) Act that the bankruptcy be extended by between six to ten years. The maximum extension that can be sought is 15 years from the date of adjudication of bankruptcy.

Mr Lehane claimed Mr Hoey has failed to cooperate by failing to provide a Statement of Affairs detailing all of his assets and had moved a substantial amount of farm machinery from his farm and hid them on the grounds of a local hotel.

It was also alleged Mr Hoey attempted to hide payments received from a meat factory and had hidden cash on his property, which was recovered following a search of the premises.

The court also heard, in the interests of public health and safety and to prevent the spread of TB, Mr Lehane had reluctantly used Defence Forces marksmen to humanely destroy five of Mr Hoey’s cows. The animals had gone wild, dangerous and could not be captured, Mr Lehane said.

Mr Hoey, represented by Eanna Mulloy SC, instructed by solicitor John Geary, denied he had not cooperated with Mr Lehane and claimed he had furnished Mr Lehane with a statement of affairs. He said, between his bankruptcy adjudication in February 2016 and May 2016, everything he had worked for was “literally wiped out and destroyed” by Mr Lehane and his agents.

Mr Hoey rejected Mr Lehane’s claims in relation to shooting of the cattle and said he remains “haunted ” after witnessing the cattle being shot in July 2016. In her judgment, Ms Justice Pilkington said she was satisfied Mr Hoey had hidden cash on his property that had not been disclosed to the OA and had failed to furnish any proper explanation for that.

The moving of assets, the proceeds of sale of cattle to the meat factory and the non-disclosure of the cash found by Mr Lehane formed a sufficient basis for finding Mr Hoey had not cooperated with Mr Lehane concerning the realisation of his assets, she held. She was prepared to extend Mr Hoey’s bankruptcy and would receive submissions in that regard, she said.

1 Irish tourists excluded from visiting Greece and Croatia
2 Taoiseach has confirmed schools will reopen at the end of August
3 Derek Chauvin charged with murder in connection with death of George Floyd
4 Quarantine will cease within fortnight, Ryanair CEO claims
5 Garda to scale down Covid-19 enforcement for June bank holiday
Real news has value SUBSCRIBE