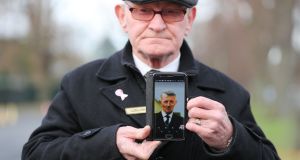 The family of a Co Louth man, Séamus Ludlow, have lost an appeal aimed at compelling the State to establish an inquiry into the “inexcusable” handling of the Garda investigation into his murder.

A report by retired High Court judge Henry Barron stated the 1976 murder of Mr Ludlow (47), who had no paramilitary connections, was “a random, sectarian killing of a blameless Catholic civilian by loyalist extremists”.

In 2015, then Minister for Justice Frances Fitzgerald apologised to the family over the “inexcusable” handling of the Garda investigation into the “callous, sectarian” murder but said there was no “new or substantial” information warranting commissions of inquiry.

Mr Ludlow was shot after leaving a bar in Dundalk and his body was found on May 2nd 1976 in a lane near his home.

No one has ever been charged in connection with the murder and his family say gardaí failed to pursue an important line of inquiry - he was an innocent victim of either loyalist or British forces who mistook him for a senior member of the IRA.

Despite the RUC (the North’s police force at the time), having identified suspects north of the Border, the Garda investigation was suspended after three weeks without explanation and on foot of what a garda told the family were “orders from Dublin”, they claimed.

An Oireachtas Committee said in 2006 it could not resolve why gardaí did not follow up the RUC information but believed it was because of a direction by a former senior garda.

The family sought commissions of inquiry to examine failures in the Garda investigation and to look into what documents might have been created by the State authorities in respect of the murder.

The State maintained the murder investigation remains open and commissions of inquiry could not progress that. It also said the DPPs on both sides of the Border recommended no prosecutions concerning four persons named in the Barron report as suspected perpetrators of the murder.

Arising from the 2015 refusal to set up an inquiry, Thomas Fox, a nephew of Mr Ludlow, took High Court proceedings on behalf of the family to have the State establish commissions of inquiry.

In a 2017 judgment, the High Court said the courts cannot force the executive to set up any kind of inquiry.

However, Ms Justice Mary Faherty said it was “undeniably acknowledged” the State had failed Mr Ludlow and his family and, on public interest grounds, directed it to pay half the legal costs of the action.

On Friday, a three judge Court of Appeal upheld the High Court decision.

Giving the COA judgment, its president, Mr Justice George Birmingham, rejected the family’s argument of a legitimate expectation commissions of inquiry would be set up by the Government arising from communications from the Department of the Taoiseach in 2002 stating the Barron report would be sent to government and to an Oireachtas Committee to advise as to any further action.

The then Government had not said it would accept or implement recommendations to set up such commissions, the judge said. There was a “problematic” issue as to whether statements of one government or minister could be binding on their successors.

He agreed with the High Court the refusal to set up inquiries was not irrational.

He rejected additional arguments of a breach of Article 2 of the European Convention on Human Rights, concerning the right to an effective investigation into a death.

Mr Ludlow’s murder happened in 1976, before the coming into effect here of the ECHR Act 2003, and that Act does not have retroactive effect, he said.

Article 2 is not concerned with “investigations into investigations” and there is “no right to truth” detachable from and independent of the Article 2 justice obligation.

The court, he said, cannot ignore there have now been four separate Garda investigations, the first “deeply flawed” investigation in 1979/80, others in 1996 and 1999, and another following the Barron report.

It was “hard to see” what more could be achieved by a further inquiry, he said.

These proceedings were “essentially misconceived” and amounted to inviting the court to trespass into the exercise “of what is quintessentially a political judgment” exercised by the Executive and Oireachtas, he concluded.

1 Sweden should have done more to combat coronavirus, health chief says
2 With Lincoln looking on, the crowd dropped to their knees as 7pm approached
3 Luke ‘Ming’ Flanagan bares his bottom half to European Parliament
4 Gardaí move against cyber crime, prostitution gang in Dublin
5 Easing restrictions: What exactly will happen next Monday?
Real news has value SUBSCRIBE