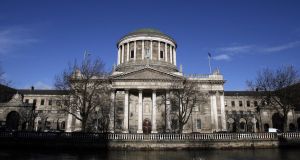 The action is listed for three days and will be heard through Irish. Photograph: Chris Maddaloni/Collins

A challenge over a Department of Education decision not to sanction a Gaelcoláiste on a State-owned site in Dublin’s Harold’s Cross for the 2020/2021 academic year has opened before the High Court.

The action is by An Forás Pátrúnachta (AFP), patron of 70 Irish-medium primary and post-primary schools; Caitríona Uí Lochlainn and Christine Ní Chiardubhán, two parents who want their children to attend the Gaelcoláiste; and Glór Mológa, representing families of children attending Gaelscoileanna in the area.

Ms Uí Lochlainn, Bóthar na Coiribe, Tír an Iúir, whose three sons attend Gaelscoil Mológa, said they are doing very well there, she wants their second-level education also to be through Irish and the failure to sanction a Gaelcoláiste on the Harold’s Cross site breaches her family’s language and cultural rights and her choice as a parent.

Represented by Cormac Ó Dúlacháin, with Dáithí MacCárthaigh, instructed by solicitor Ruadhán MacAodháin, their case is against the Minister for Education and Skills, Ireland and the Attorney General.

Listed for three days, it opened on Wednesday before Ms Justice Bronagh O’Hanlon and is being conducted through Irish.

It arises from the Minister for Education’s November 2019 decision approving a new post-primary school for the school planning areas Dublin 6/Clonskeagh and Dublin 6/West.

Four parties applied to be patrons of that school, including AFP and Educate Together, to be located on the site of the former greyhound stadium.

The Department said the total number of valid first preferences from parents for school patron was 291 for Educate Together, 167 for AFP, 60 for the City of Dublin Education and Training Board and seven for Scoil Sineád.

The level of parental preferences for instruction through Irish was 172 (32.76 per cent) compared with 325(61.9 per cent) for English-medium instruction.

It noted there are no Gaelcoláistí or Aonaid (an all-Irish unit within an English-language school) within the two school-planning areas and the nearest Gaelcoláiste to the Harold’s Cross site was 3.54 km away at Ballinteer.

The Department awarded the patronage to Educate Together to provide a multi-denominational voluntary secondary school with English as the medium of instruction and recommended the establishment of an Aonaid in that school.

In their action, the plaintiffs want the court to quash the decision not to permit and facilitate a Gaelcoláiste under the patronage of AFP on the site and to declare the defendants have a duty to take every practical step to support the foundation of a Gaelcoláiste in the area for the 2020/2021 school year under patronage of AFP.

They say there is enough space on the site and enough demand for a sustainable English speaking second-level school catering for 600 pupils and a Gaelcoláiste for 400 pupils.

They do not want to interfere with provision of an English-medium secondary school but the “significant” demand for a Gaelcoláiste in the area should also be satisfied, they argue.

The defendants, it is claimed, did not fulfil their statutory language duties under the 1998 Education Act in the process of appointing a patron.

They also failed to fulfil their constitutional obligation to recognise and protect the status of Irish as the national language/first official language and to uphold the constitutional rights of the plaintiff parents and their children to have second level education in Irish, it is claimed.

In submissions, it is argued every parent has the right to make a decision that Irish should be central in their child’s life and that education though Irish is central to the survival of the language.

Irish is the main official language of the State in terms of education and establishing schools but, in this case, the State was not urging the use of Irish, it was doing the opposite, it is claimed.

The decision and attitude of the Minister means this area will be without a second-level Irish-speaking school despite the demand from parents in the area, a demand more than sufficient in terms of the official policy of the State, it is argued.