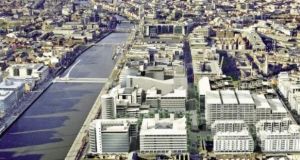 Dublin City Council has taken a High Court challenge against An Bord Pleanála’s refusal to relocate two proposed cyclist and pedestrian bridges over the river Liffey.

The council brought proceedings after the planning authority last November refused to allow the council to relocate the proposed bridges in an eastward direction and proposed that a third bridge be constructed.

The council says the board’s decision, which the council wants quashed, means the cost of building the bridges will increase by between €25 million and €42 million.

The two bridges, which were to cost over €31 million to build, were originally included in a 2012 plan known as the North Lotts and Grand Canal Dock Strategic Development Zone Planning Scheme.

Permission for the planning scheme was approved by the board in 2014.

However, the council sought to relocate the two proposed bridges on grounds including concerns that the proposed Forbes Bridge may impact on the proposed Dart underground development.

The new locations would also mean the bridges could be built quicker and more cheaply, would allow for additional quayside space for boats and would improve north-south connectivity for pedestrians and cyclists.

The council sought permission from An Bord Pleanála to move the Forbes Street bridge 150m so it would be in line between New Wapping Street on the northside to Blood Stoney Road and would be renamed Blood Stoney Bridge.

The council also proposed to move the eastern bridge 330m, renamed the Points Bridge, and put it close to Tom Clarke Bridge (formerly the East Link).

In its decision, An Bord Pleanála refused the council’s application to move the proposed bridges on grounds including that the original sites were appropriate locations and would better serve the interests and amenities in the long term.

The original locations for the bridges would serve cyclists and pedestrians and would alleviate congestion compared to the proposed alternative locations, the board also found.

The board added in its ruling that, as well as the two proposed bridges , an additional bridge immediately west of the existing Tom Clarke Bridge should be constructed.

In judicial review proceedings against the board, the council claims the planning authority has breached the 2000 Planning and Development Act, that the board has acted without jurisdiction and the board has failed to give adequate reasons for its decision.

The council says the addition of a third bridge as part of the scheme would create more visual clutter and reduce the navigable space of the river.

Permission to bring the action against the planning authority was granted, on an ex-parte basis, by Mr Justice Richard Humphreys on Tuesday. The judge made the matter returnable to a date in February.

1 Trump turns to bible for photo op as DC burns around him
2 Covid-19: Easing of restrictions ‘unlikely’ to be speeded-up
3 Body of missing five-year-old recovered from Lough Mask, Co Mayo
4 ‘Frustrated and angry’: Thousands march in Dublin to protest death of George Floyd
5 Large gatherings reported throughout State on bank holiday
Real news has value SUBSCRIBE