Denis O’Brien ‘not trying to chill’ speeches made in Dáil 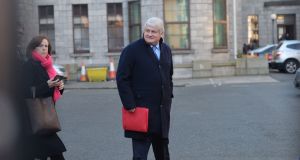 Businessman Denis O’Brien’s action over statements made by two TDs in the Dáil about his banking affairs has concluded at the High Court with judgment reserved. Photograph: Alan Betson / The Irish Times

Businessman Denis O’Brien’s action over statements made by two TDs in the Dáil about his banking affairs has concluded at the High Court with judgment reserved.

Ms Justice Una Ní Raifeartaigh reserved judgment until the new year and said she would not finalise her decision until the High Court rules on the separate case of former Rehab chief executive Angela Kerins. That case raises some similar issues and judgment was reserved on it last October.

Mr O’Brien’s case, against the Clerk of the Dáil and the State, concluded on Thursday after almost seven days. Legal costs are expected to exceed €1million with six senior counsel involved in the case daily along with several junior counsel and solicitors.

Liability for costs will be decided after the judge rules on the claims advanced.

In his action, Mr O’Brien alleges Social Democrats TD Catherine Murphy and Sinn Féin TD Pearse Doherty “clearly disregarded” the constitutional separation of powers between parliament and the courts when they respectively made their statements in the Dáil in May and June 2015.

He claims the statements, made when he had ongoing High Court proceedings against RTÉ seeking to restrain it publishing details of his banking relationship with State-owned Irish Bank Resolution Corporation, amounted to “unwarranted interference” in the judicial domain.

He also claims the Dáil Committee on Procedure and Privileges (CPP), which rejected his complaints over the statements, failed to “properly police” the TDs over their statements.

In opposing the case, the respondents’ core arguments was that the court, as a result of Article 15 of the Constitution, has no jurisdiction to intervene.

They plead several legal decisions have made clear that Article 15.13, which states members f the Oireachtas are not amenable to any court or authority other than the Houses themselves for “utterances” in the Houses, effectively “ousts” the court’s jurisdiction and confers “absolute” immunity from suit over such utterances. They also argue, if Mr O’Brien wins, that would greatly restrict Dáil speech into the future.

In closing arguments on Thursday for Mr O’Brien, Eileen Barrington SC said her side was not saying the court should find what Ms Murphy or Mr Doherty said was “untrue or misleading”. It must be accepted these TDs “crossed a line” and their actions should not be endorsed, she said.

This was a “deliberate and knowing undoing”, not just of a High Court order but also Mr O’Briens’s legal action. “This was a breach of the constitutional equilibrium and should not be accepted as perfectly normal.”

Mr O’Brien’s case was that what happened was “not right”, their statements “should not have been made” and there were “consequences” for making them.

He was not seeking to visit “legal consequences” on either Deputy but to have the court conduct a “materially different” exercise, “almost a judicial review style procedural exercise that does not come back to the utterances themselves”.

He was “not trying to chill anybody’s speech”but to have the rules applied. Several interventions of the Leas Ceann Comhairle asking Deputy Murphy “not to name names” underlined that point, she argued.

Mr O’Brien wanted a “limited” relief, a declaration the statements amounted to unwarranted interference in the judicial domain, and to have “the rules of the game” applied to respect the constitutional separation of powers.

Because he was not seeking to have legal consequences imposed on any TD, his case was not captured by Article 15.13, she argued. Mr O’Brien accepted there is an “island of non-justiciability” but argued what he was seeking fell outside that and wanted the court to define the “vital fault line” between the organs of the State.

This was not a hypothetical issue but rather a “live one”, she said. “You only have to turn on the radio to see that.”

While the defendants “ vehemently advanced ” a “back-off” argument, that did not preclude a court examination of the CPP decisions rejecting Mr O’Brien’s complaints. If the court applied other legal decisions concerning the right to fair procedures, the CPP decisions would be found “sorely wanting”.

Mr O’Brien, the sole witness in the case, told the judge last week he wants the court to censure both TDs over their statements and to lay down a line beyond which Dail deputies cannot go. He said both TDs acted “recklessly and maliciously”, he hoped this would never happen again and his case “will change things for the future.”