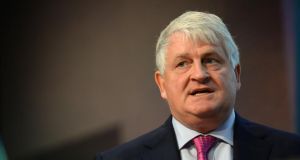 Businessman Denis O’Brien has been granted a High Court injunction preventing RTÉ from broadcasting a report relating to his private and confidential banking affairs with Irish Bank Resolution Corporation (IBRC).

Mr Justice Donald Binchy ruled the details of his judgment cannot be published until certain parts of it have been redacted after the case comes back before him in June.

The judge read his conclusions in court, but following submissions from counsel for both sides, he ruled the judgment should not be released pending the redactions.

The three-day injunction hearing was told Mr O’Brien wanted to restrain publication of the broadcast report because it breached his privacy rights and would cause him incalculable commercial damage.

IBRC, which brought a separate but related application before the court, supported his case.

RTÉ opposed it on grounds including the right to freedom of expression and public interest. It also argued the courts should be slow to interfere with legitimate journalistic judgment.

It said Mr O’Brien’s suggestion the report could have been run without naming him would result in a boring and sterile story.