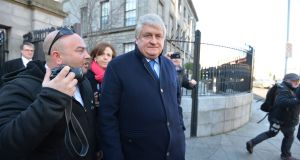 Businessman Denis O’Brien has been accused of trying to restrict Oireachtas speech in his action over comments about his affairs made in the Dáil. Photograph: Alan Betson/The Irish Times.

Businessman Denis O’Brien’s target in his legal action over Dáil statements about his banking affairs is the “future freedom of parliamentary debate”, the State has told the High Court.

If Mr O’Brien wins, any person who sues to prevent publication of material, alleges defamation or breach of privacy, can put the Oireachtas on notice of their case with the effect of stifling debate, Maurice Collins SC said.

What was being sought, through “a series of superficially skilful subterfuges and sidesteps”, was to have the courts abrogate the parliamentary freedom of speech conferred by the Constitution.

The court was being asked to delineate what can and cannot be said in future Oireachtas debates and “to endorse the creation of a category of prohibited parliamentary speech”, Mr Collins, for the State, said.

No other country with parliamentary privilege has ever sought to qualify it in the way Mr O’Brien wants to, he added.

It was being argued by Mr O’Brien that Articles 15.12 and 15.13 of the Constitution - provisions found by the courts to confer absolute privilege and immunity on parliamentary speech - do not apply in this case, he said.

Instead, the court was being asked “to fall down a wormhole where words mean what Mr O’Brien says they mean” and to find constitutional provisions “do not mean what they seem clearly to say”.

The meanings Mr O’Brien contended for were “simply wrong” and the State’s case was that Articles 15.12 and 15.13, individually, provided a “complete answer” to his claim, and the courts have no jurisdiction “to pass judgment” on what parliamentarians say in the Oireachtas.

The effect of what Mr O’Brien sought was not just to sanction Social Democrats TD Catherine Murphy and Sinn Féin TD Pearse Doherty over their Dáil statements about his banking affairs but to “greatly restrict” Oireachtas speech “into the future”.

If he succeeded, that would effectively involve “the negation of parliamentary privilege in this jurisdiction”.

“The target of this case is future freedom of parliamentary debate,” he said.

Mr Collins, for the State, is expected to conclude his arguments on Wednesday opposing Mr O’Brien’s action alleging the two TDs “clearly disregarded” the constitutional separation of powers between parliament and the courts in making their statements.

In his case against the Dáil Committee on Procedure and Privileges and the State, being heard by Ms Justice Una Ní Raifeartaigh, the businessman wants the court to declare the statements amounted to “unwarranted interference” in the judicial domain.

He also claims the committee failed to “properly police” the TDs over their statements, made in May and June 2015 when he had ongoing High Court proceedings against RTÉ seeking to restrain it from publishing details of his banking relationship with State-owned Irish Bank Resolution Corporation.

In arguments on Tuesday, Mr Collins said Mr O’Brien has invited the court to find the TDs’ statements were deliberately made to undermine a court order and, at a minimum, were made recklessly, maliciously and in bad faith.

It was “striking” that such assertions by the businessman, made under court privilege, were made when Mr O’Brien had elected not to sue the TDs personally or at least directly.

Both TDs were defendants in the sense the case is against the Clerk of the Dáil, who represents all deputies, he said.

The decision not to sue the TDs was clearly “a tactical procedural decision” because that, Mr O’Brien claimed, meant he was not seeking to make them “amenable” to the courts in breach of the Constitution.

There is the possibility this case was “a stalking horse” for another claim as a case against the TDs had not been ruled out, he added.

His side found it difficult to know what case Mr O’Brien was making, as several claims have been abandoned, counsel also said.