Citizens have no remedy for comments made about them in Oireachtas, counsel for State says 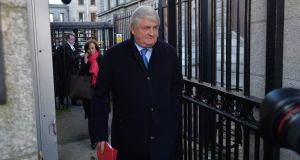 Denis O’Brien leaving the Four Courts last week during his action against the Clerk of the Dáil and the State over comments made by two TDs in the Dáil. Photograph: Alan Betson/The Irish Times.

A citizen has “no legal remedy whatsoever” for anything said about them in the Houses of the Oireachtas, no matter how serious or damaging they believe it is, a lawyer for the State has told the High Court.

It was “a tribute” to businessman Denis O’Brien’s “self-regard” that he thought statements by two TDs “which offended him, and which he thinks disclosed his private banking information” amounted to “a constitutional coup d’etat”, Maurice Collins SC said.

The Constitution intentionally provided a “zone of immunity” and “closed universe” around “utterances” in the Dáil and Seanad which prevented them being scrutinised by the courts, he added.

He argued that Article 15.13 of the Constitution, which states members of the Oireachtas are “amenable” only to the Houses for “utterances” in the Houses, created an “absolute barrier” to the case taken by Mr O’Brien over Dáil statements made by Social Democrats TD Catherine Murphy and Sinn Féin TD Pearse Doherty.

Mr Collins was concluding his arguments opposing Mr O’Brien’s action which alleges both TDs “clearly disregarded” the constitutional separation of powers between parliament and the courts when they made their statements in May and June 2015.

In his case against the Clerk of the Dail and the State, Mr O’Brien wants the court to declare the statements, made when he had ongoing High Court proceedings against RTÉ seeking to restrain it from publishing details of his banking relationship with State-owned Irish Bank Resolution Corporation, amounted to “unwarranted interference” in the judicial domain.

He also claims the Dáil Committee on Procedure and Privileges (CPP), which rejected his complaints over the statements, failed to “properly police” the TDs over their statements.

Beginning closing arguments for Mr O’Brien, Eileen Barrington SC said the businessman’s “over-arching” case concerned the “equilibrium” between the courts and parliament provided for in the Constitution.

The State’s position failed to recognise the court’s role in maintaining the balance between the separation of powers, counsel said. In seeking to have the court focus almost exclusively on Article 15.13, the State was “skewing the balance” and not giving the court “the full perspective required”.

While Article 15 was “an important provision”, it was an emanation of one of the principles of the separation of powers, and the case law provided jurisdiction for the courts to intervene in certain circumstances. There was no “special carve-out” of some “hyper-nonjusticiable cases” as a result of Article 15.13, she argued.

Her side maintained Article 15.13 was not engaged here and disputed the other side’s insistence on the “broadest possible interpretation” of that provision. Every statement in the case law emphasising the significance of Article 15.13 also said that because of its importance and significance, it must be narrowly construed, she said.

“Good fences make good neighbours,” counsel said, quoting from Mending Fences, a poem by US poet Robert Frost. The courts and executive were supposed to keep “to their side of the fence” but, when a neighbour hopped over to your side of the fence, that might be justiciable.

Because the statements did have that effect, Article 34 dealing with the powers of the courts was engaged, she argued. The utterances of the TDs effectively decided the substantive dispute between Mr O’Brien and RTÉ and not just his application for an injunction restraining it from publishing details of his private banking affairs.