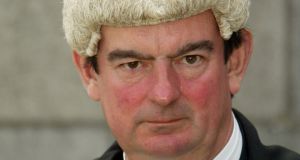 George Birmingham said he hoped judges would soon be appointed so the number of cases taken out and rescheduled would be reduced.

The new President of the Court of Appeal has warned waiting times of at least 20 months for appeal hearings will get worse and more hearing dates for appeals could be cancelled unless new judges are appointed urgently.

Because the appeal court is still struggling to dispose of hundreds of appeals inherited from the Supreme Court, plus its own mounting caseload of appeals, the case for substantially increasing the number of judges is “compelling”, Mr Justice George Birmingham said.

He was faced with an “immediate crisis” arising from the fact two of the court’s ten judges retired this year and had not been replaced while three more judges are to retire or take up new positions later this year.

In the circumstances, he had no choice but to cancel hearing dates fixed next week for certain appeals, he said.

He very much hoped there would soon be judges appointed to the court so the number of cases that will have to be taken out and rescheduled would be reduced, he said.

The three appeals cancelled on Thursday include one over a record award of €10 million libel damages made by a High Court jury eight years ago to former Kenmare Resources executive Donal Kinsella over a press release issued for the company after an incident during a company trip in Mozambique in 2007 where he sleepwalked naked into a female colleague’s bedroom.

The jury found the release wrongly meant Mr Kinsella had made inappropriate advances to the woman, company secretary Deirdre Corcoran, and awarded him €10 million against the company.

The award has caused great difficulty for the company and it was anxious the appeal be heard as soon as possible, Paul Gallagher SC, for Kenmare, said today.

Mr Justice Birmingham said he was very sorry the affected appeals could not proceed next week and he apologised to the lawyers and especially their clients.

He told Mr Gallagher the best he could was to fix a hearing date in December and also fixed for hearing in July two urgent appeals concerning revocation of refugee status for two men, represented by Colm O’Dwyer SC, who now have no immigration status here and are being looked after by the Crosscare agency.

The judge, who was formally sworn in on Wednesday as the new President of the COA, told lawyers on Thursday he very much regretted, on what was effectively his first day in his new position, having to cancel hearings.

The appeal court, set up four years ago, continues to battle with a “legacy” of hundreds of appeals inherited from the Supreme Court. It has dealt with 850 such appeals to date but 550 remain outstanding while the court’s own separate caseload also continues to increase.

The former COA president Mr Justice Sean Ryan had retired last March and Mr Justice Paul Gilligan earlier this month. Mr Justice Alan Mahon will depart shortly to take up the post of Defence Forces Ombudman and Mr Justice John Hedigan is to retire within a few months. Mr Justice Gerard Hogan has been nominated to the European Court of Justice.

Mr Justice Birmingham said it was difficult to allocate complex appeals to judges due to depart within months as such cases involved reserving judgments.

He said six of the ten COA judges were normally assigned to hear civil appeals while four sat in the Criminal Courts of Justice.

Now there were four judges for civil appeals and this, plus the need to allow departing judges time to write up judgments, meant he effectively has just five judges available to sit on an unrestricted basis.

He suggested the legislature consider a “simple amendment” that would allow judges deliver, after their retirements, judgments on cases which they have heard before retirement.

This would mean judges due to retire would have more time to actually hear cases rather than have to be freed to write up judgments.