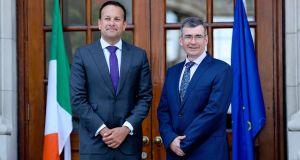 A relative of a person killed in one of the worst atrocities committed during the Troubles has brought a High Court challenge aimed at preventing the appointment of PSNI Deputy Chief Constable Drew Harris as the next Garda Commissioner.

The action has been brought by researcher Ciaran MacAirt whose grandmother Kathleen Irvine was one of 15 people killed when a loyalist bomb exploded at McGurk’s Bar in Belfast in December 1971.

In his action, Mr MacAirt says Mr Harris lacks the independence required to be Garda Commissioner due to this role in the PSNI and its predecessor the RUC.

Represented by Gerard Humphreys Bl, instructed by McGeehin Toale Solicitors claims Mr Harris could not direct or control any ongoing investigation into the murder of an Irish citizen where there is credible evidence of collusion between the killers by the RUC or agencies of the British state, including the Dublin Monaghan bombings.

Counsel said it is believed the appointment will take place in September.

He claims that due to his senior role with the PSNI Mr Harris has possession of information directly relevant to Garda investigations into the murder of Irish citizens during the troubles.

He claims Mr Harris has signed and is bound by the UK’s Official Secrets Act making it impossible to fully discharge his duties as the next Garda Commissioner.

This conflict it is claimed is incompatible with the duties of Section 5 of the Garda Síochána Act, in particular to state security and the investigation of crime.

Mr MacAirt, who says he was shocked by the decision to appoint Mr Harris, says he was written a book about and researched the McGurk’s bombing and is a director of the charity Paper Trail which supports victims and survivors of the Troubles.

He claims that he has been trying to establish the truth behind the bombing.The RUC initially blamed it on an IRA bomb being accidentally detonated when in fact the bomb was deliberately planted in the bar by the UVF.

One of their members, Robert Campbell was jailed for the atrocity in 1977.

However Mr MacAirt says there was never a proper investigation into the bombing, and claims there was RUC cover-up in regards to what happened.

He claims his efforts to find the truth have been frustrated by the PSNI, and have been consistently obstructed by Deputy Chief Constable Harris.

It is claimed that as part of his role with the PSNI Mr Harris had responsibility the PSNI’s Historical Enquiries Team, which investigated the bombing. It produced four reports, which Mr McAirt says Mr Harris had the final say over, into the bombings.

The four reports he said were all rejected by the victims of the bombing as the allegations of collusion between loyalist paramilitaries and the RUC were not addressed.

Mr Harris’s role in that investigation into the murder of Irish citizens he says makes it impossible for him to hold the position of Garda Commissioner.

In his action against the Minister for Justice, Ireland and the Attorney General Mr McAirt seeks various orders including one quashing the decision to appoint Mr Harris as Commissioner of An Garda Síochána.

In the alternative, he seeks an order preventing Mr Harris having any role in the direction and control of the Garda investigation into the murder of Irish citizens where there is credible evidence of collusion by the RUC or other agencies of the British state in the murder.

He also seeks declarations that the Irish State is obliged to conduct independent investigations murders of Irish citizens where there is credible evidence of collusion.

He further seeks a declaration that due to his obligations under the UK’s Official Secrets Act and his role in the protection of the PSNI, the RUC and other agencies of the UK Mr Harris would be incapable of controlling an independent investigation into the murder of those Irish citizens where collusion was alleged.

The matter came before Ms Justice Miriam O’Regan at Friday’s sitting of the High Court. The Judge granted permission, on an ex-parte basis, for Mr MacAirt’s lawyers to make an application for leave to bring his judicial proceedings on notice to the State respondents.

The matter will return before the court on Tuesday.