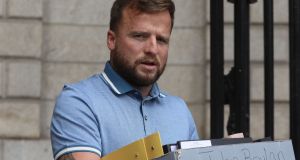 The career of a Cheltenham-winning horse at the centre of a proceeds of crime case has ended due to an injury after it was raced following the freezing of its ownership by the Criminal Assets Bureau (CAB), the High Court has heard.

He is contesting the bureau’s claim he became the 90 per cent owner of the horse, named Labaik, through the proceeds of crime.

Labaik, at odds of 25/1, won the 2017 Supreme Novices Hurdle, and a prize of €125,000. The win caused a shock in betting circles because Labaik had won four of its previous nine races but refused to leave the stalls for three of them.

After CAB obtained an interim court order allowing it to hold a seized horse passport, Labaik remained with one of the two other part owners, who are not involved in criminality.

Mr Boylan has brought his own proceedings against CAB claiming losses arising out of the injury, contending it was due to CAB allowing the horse to be run.

CAB denies Mr Boylan’s claims and, in its own proceedings, wants the horse declared the proceeds of crime along with a 2013 Mercedes Benz, bought from the UK for £28,000.

CAB claims Mr Boylan is the beneficial owner of the car but he has claimed it is owned by his girlfriend, Naomi Kinsella, against whom the proceedings are also brought.

The case opened before Ms Justice Carmel Stewart on Tuesday but was adjourned so CAB officers involved in the case could be cross-examined by Mr Boylan’s counsel.

Earlier, Ben Ó’Floinn BL, for CAB, reading from an officer’s affidavit, said Mr Boylan has convictions for drug dealing. He said a silver Mercedes, in the name of Ms Kinsella, was imported from the UK and detained in 2017 by CAB.

The horse was purchased with money from a joint account of Mr Boylan and Ms Kinsella, the majority of the price being paid through a credit transfer by him, counsel said.

An animal feed company, Forest Hill Animal Feeds, was also set up and registered in the name of an associate of Mr Boylan’s who is also involved in criminality, counsel said.

After Mr Ó Floinn said the CAB officers were not available at short notice for cross examination, the judge adjourned the case. A new date for the hearing is expetced to be set in October.