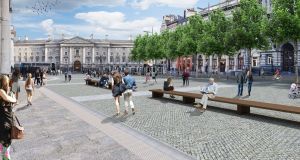 A architect image of the proposed College Green Civic Plaza.

A judge wants to hear from planners and the State before deciding whether to allow an environmental campaigner bring a High Court challenge over a refusal of permission for the College Green Civic Plaza in Dublin.

Mr Justice David Barniville said he wants An Bord Pleanála, the State and Dublin City Council to be put on notice of John Conway’s application for judicial review of the board’s October 17th refusal of permission for the plan.

The main reason for the refusal was uncertainty over the Dublin City Council’s proposals for dealing with the banning of buses from College Green so that it can be turned into a pedestrian/cyclist/Luas-only area.

The board, which considered the council’s plan, said there was a failure to demonstrate the capacity of the quays to take not just the re-routed buses, but the additional pedestrian traffic which would have to use the quays.

The plan was contrary to proper planning and sustainable development, the board also held.

Mr Conway, who is from Dundalk and part of the Louth Environmental Group, wants the board’s decision quashed and remitted to it for reconsideration. The council is a notice party to his proceedings.

He caims the refusal was unlawful because the traffic assessment failed to take account of significant changes proposed by the National Transport Authority (NTA) to the Dublin Bus network, known as “BusConnects”.

The board made an incorrect assumption that the council, or the board itself, exercised control over the routing of buses when this role was actually vested in the NTA, he contends.

He says there was also a failure to take account of changing conditions on the ground, including that, since the opening of the cross-city Luas line, there has been a 20 per cent reduction in buses using College Green.

The NTA plans to implement a morning rush hour ban on taxis going through College Green and to cut bus traffic by another 16 per cent, it is also argued.

Mr Conway’s case is also brought on grounds of alleged failure by the State to provide an effective remedy to challenge the refusal of the permission in breach of the Constitution and the EU Charter of Fundamental Rights.

The inability of the High Court to deal with this matter on its merits or its facts renders judicial review as “something less than an effective remedy”, he also argues.

On Friday, Mr Justice Barniville was asked by Paul O’Shea BL, for Mr Conway, to grant leave to bring judicial review on a one side only represented basis.

The judge said Mr Conway had not participated in any way in the planning process and this was therefore “an unusual application to say the least”.

While he had a wide discretion having been assigned specifically to deal with challenges to strategic infrastructural developments, he had a number of concerns including whether Mr Conway would satisfy “sufficient interest” criteria for bringing this case.

In those circumstances, the judge adjourned the matter to next month so that the board, the State and the council could be in court for the hearing of the leave application.