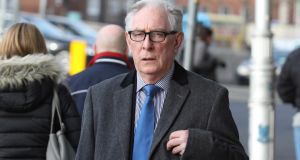 James Gough claims the Association of Irish Racehorse Owners council has arranged the nomination in such a manner that there is no election for the position on the HRI board. Photograph: Collins Courts

A legal action has been brought over the process used by the Association of Irish Racehorse Owners (AIRO) to select its representative on the board of Horse Racing Ireland.

Businessman James Gough, the nominee of the 2,000-member AIRO to the board of HRI since 2015, has brought the High Court challenge.

He wants to be re-nominated to the board of HRI, Irish horseracing’s governing body but he claims the Council of AIRO has prevented his name being put forward to the membership.

He claims another person’s name has been put forward to the members as AIRO’s nominee to the board of HRI.

He has raised an issue about that nomination process and claims the Minister for Agriculture, Food and the Marine is legally obliged to determine this dispute.

He claims the Minister has yet to determine the matter but the AIRO intends to press on with the nomination of the other person to the board of HRI.

In a letter to the court, lawyers for AIRO disputed Mr Gough claims.

AIRO maintains the nomination is valid and has been done in accordance with the organisation’s rules.

It also claims Mr Gough is not entitled to bring proceedings and the matter does not need to be determined by the Minister.

In his proceedings, Mr Gough, of Cois Fharraige, Silverbeach, Gormanston, Co Meath seeks orders including an injunction restraining AIRO holding a general meeting of its members for the sole purpose of electing a nominee to sit on the board of the HRI.

Mr Gough, represented by Arthur Cunningham BL, instructed by solicitor Peter Boyle, also seeks an order restraining AIRO nominating a member to the board of HRI.

He claims the current situation has come about because of a change in the constitution of AIRO where only a member of its council could be appointed as the association’s representative to HRI.

Before that change was implemented, the nominated representative only had to be a member of AIRO, he says.

Mr Gough claims the Council has arranged the nomination in such a manner that there is no election for the position on the HRI board at the organisation’s AGM. He was previously elected by the membership, he said.

He has referred the matter to the Minister for Agriculture for determination.

He claims, until the Minister makes a decision on the dispute, it is inappropriate for AIRO to proceed with nomination of the other person.

The case came before Ms Justice Leonie Reynolds at the High Court on Thursday but was adjourned after solicitors for AIRO in a letter offered certain undertakings to Mr Gough.

The organisation, while disputing all his claims, and stating the complaint is misconceived, has agreed not to proceed with a meeting where the nominee for appointment to the board of HRI will be selected for a period of 21 days.

The sides have also agreed a timetable for exchange of documents in the case, which will return to court early next month.