Boy who fell through skylight settles court action for €75,000

Rory Veighey, who was attending a wedding reception with his family, was playing with other children on grass 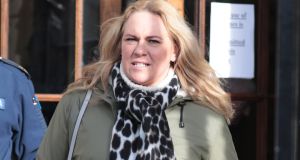 A boy who, when he was a toddler, fell 10ft down into a tunnel after falling through a skylight has settled his High Court action for €75,000.

Rory Veighey McCabe was aged just over two years and was playing on a grassed area at the Moyvalley Hotel, Co Kildare, when he dropped through the skylight, which was embedded in the ground. The skylight was one of a number embedded in a lawn area to provide light to a tunnel used by staff to access the hotel kitchens from the outside of the hotel.

Rory, who was attending a wedding reception with his family, was playing with other children on the grass while wedding speeches were taking place.

In his action, it was claimed the accessible lawn area of the hotel was allowed to have an unsecured skylight and this constituted a trip or hazard. It was claimed there was failure to warn the public and the boy’s parents of the existence of the skylight on the lawn surface and failure to remove a hazard from an area of the premises open to visitors

John Kennedy SC, for the boy, told the court liability was not at issue in the case. The toddler was not knocked out but suffered lacerations and a broken arm, he said. He also lost three of his baby teeth as a result of the accident. Counsel said Rory is now in fifth class and doing well in school.

Approving the settlement, Mr Justice Kevin Cross said the fall was very severe and nasty and the child was fortunate not to have suffered a brain injury. Rory has probably forgotten all about it now, he remarked. Mr Justice Cross said it was a very good settlement and he wished the boy well for the future.