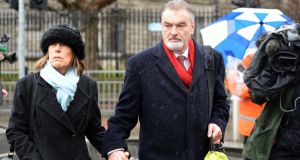 After 64 days of hearing, another ten minutes was hardly going to make much difference but the outcome of Ian Bailey’s High Court case had to be delayed while his legal team went looking for him after word came back just after 4pm on Monday that the jury were ready to return.

Like almost everyone else in the High Court, the Manchester-born journalist didn’t expect the jury to return so quickly and he had left the environs of Courtroom 24 and so everyone waited for him to return to the near inevitable chorus of murmurs about “Hamlet without the Prince”

Tall and loping, he strode into court and taking off the long black coat and red scarf that he was wearing to protect him from the driving Dublin rain, he sat beside his partner of almost a quarter of a century, Welsh artist, Jules Thomas in the seats behind his legal team.

He brushed back his thinning hair from his forehead and began to clench and flex his jaw as the jury of seven men and four women filed into the jury box before the foreman handed the issue paper to the Registrar who in turn handed it to Mr Justice John Hedigan.

Continuing to clench and flex his jaw, Mr Bailey put back his head and looked up towards the ornately moulded ceiling before closing his eyes as Mr Justice Hedigan read through the lengthy first question put to the jury for consideration.

It seemed to take forever as the judge read out whether or not the jury believed three named gardaí, Jim Fitzgerald, Kevin Kelleher and Jim Slattery had conspired by threats or inducement to get Marie Farrell to make a statement implicating Mr Bailey in the murder, knowing it to be false.

And then the judge paused for just a sliver of a second – and one could hear what seemed like the echo of eternity rebound around the room– before he answered the question.

“No – is that the unanimous verdict of you all?” he asked and the jury foreman confirmed that it was.

Mr Bailey’s eyes remained resolutely closed and his jaws seemed to clench even tighter as Mr Justice Hedigan read out the second question for the jury – did garda Jim Fitzgerald conspire with Maurice Walsh to get Marie Farrell to make false complaints of harassment against Ian Bailey?

Again the answer was No and again the jury foreman confirmed it was their unanimous verdict and then it was over – the other questions relating to damages all fell by the wayside and Mr Bailey’s lengthy legal bid “to clear his name” and end 18 years of being treated like ”a pariah” lay in tatters.

Emerging from court 20 minutes later, he looked on stonily as his solicitor, Frank Buttimer, said they would evaluate their position regarding an appeal. And then holding Ms Thomas by the hand, Ian Bailey headed off down Chancery Place, pursued, not for the first time and perhaps not for the last, by a posse of reporters.