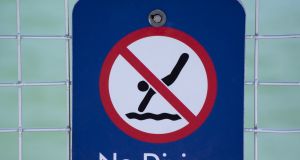 The judge said signage at the pool was “woefully inadequate”. Photograph: Getty Images

A woman who effectively lost her two front teeth when she dived into a swimming pool lacking appropriate “No Diving” signs has been awarded €38,097 damages at the High Court.

He said Ms Babos (32), an assistant manager at the Marker Hotel in Dublin, had put in a very modest claim and West Wood was fortunate the case had not been brought initially in a court of higher jurisdiction.

He said the signage at the pool was “woefully inadequate” and he did not accept West Wood’s claim there was a lifeguard on duty at the time.

It was quite clear West Wood was negligent and there was no question of contributory negligence, he said. Ms Babos, in diving into the pool, had no reason to believe it was unsafe to do so, he said.

Westwood had appealed the Circuit Court award and argued there was contributory negligence on the part of Ms Babos.

Hugh Mohan SC, for Ms Babos, said she had never swum at West Wood before, was there as a guest of a friend and was unaware it was shallower than the 2m she expected it to be.

Ms Babos told the court she did not see any signs saying not to jump or red indicators and had dived because it was a big pool.

She returned a few days after the accident to her native Hungary for dental treatment and required two crowns and root canal treatment. She still has to be careful how she bites when she eats, she said.

She denied, under cross-examination by Kerry Jane Morgan, she chose an unsafe method to enter the pool.

Mr Justice Noonan, affirming the Circuit Court order and increasing it, said she had effectively lost her two front teeth which was cosmetically difficult for anyone but especially for an attractive young woman.

She would require to have the crowns replaced every five to 10 years and they would never be as good as the natural teeth, he also said.