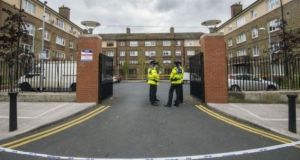 Gardaí made 38 requests for mobile phone records as part of their investigation into the killing of Gareth Hutch, the trial of three Dubliners accused of his murder has heard.

Mr Hutch (36), a nephew of Gerry ‘the Monk’ Hutch, was shot dead as he got into his car outside Avondale House flats on North Cumberland Street in Dublin on May 24th, 2016. He died as a result of four gun shot injuries.

The prosecution is seeking to introduce mobile phone evidence in the trial and spent much of Monday calling evidence on the provenance of phone records requested by gardaí.

The Special Criminal Court heard that two SIM cards were found in a Honda Civic car which the prosecution alleges is associated with Mr Keogh.

Mr Kirwan said he felt the CDR (call data records) requested were necessary for the proper investigation of this offence and he forwarded the requests to the service providers between May and October 2016. Mr Kirwan approved 36 of these requests and the two remaining requests were authorised by a colleague.

Maureen King, chief executive of iTrust Ethics, told Mr Collins that CDR requests were received from a secure and dedicated email address in An Garda Síochána. Ms King said the database was accessed and the information was retrieved before being emailed back to gardaí.

Ms King said she was satisfied that accurate records were obtained at the time. She agreed with Mr Collins that the documentation would not disclose the identity of any individual.

Under cross-examination by Seán Guerin SC, for Mr Keogh, Ms King said she was aware the information could be used to identify people when there is a legitimate criminal investigation.

Det Garda Niall Hodgins told Mr Collins that he went to the home of Mr Fox’s partner on May 25th, 2016. When he requested her mobile phone, she told him she wanted to call her solicitor and left the room. She gave her mobile phone to Det Gda Hodgins upon returning to the room, the court heard.

Under cross-examination by Dean Kelly BL, for Mr Fox, Det Garda Hodgins said he attended the Mater Hospital with Mr Fox after he became unwell in his cell. He required medical attention after an attempt at self-harm. The witness agreed that certain members of Mr Fox’s family were allowed access to him in the hospital.

The prosecution contend that Mr Keogh threatened to kill Mr Hutch the evening before the shooting, that Mr Fox and Ms Keogh were instrumental in planning the murder, and Mr Keogh and another man, ‘Mr AB’, were the shooters.