John Murray remanded in custody for sentence on December 2nd 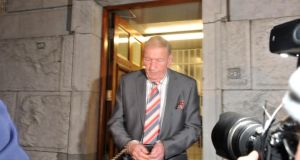 A former lord mayor of Cork has been remanded in custody for sentence after a jury today convicted him of sexually assaulting a teenage girl two years after he served as the city’s first citizen.

John Murray (83) of Gregg Road, Cork had pleaded not guilty at Cork Circuit Criminal Court to six counts of sexually assaulting the girl while in her early teens at four locations in the city on various dates between March 1996 and October 1998.

Following six hours of deliberations spread over two days, the jury of seven men and five women found Murray, a retired taxi driver, guilty of five of the six counts after hearing evidence from 17 witnesses.

Judge Sean O Donnabhain adjourned sentencing until December 2nd to allow for preparation of a victim impact statement from the complainant and medical reports on Murray. He remanded the former councillor in custody to appear again on that date.

The jury returned today at lunch hour and found Murray unanimously guilty of sexually assaulting the woman in his car on a Cork city centre street in 1996 while they found him guilty of four of the remaining five counts by a majority verdict.Those four charges related to sexual assaults in a house in Cork and in the ladies toilet of a public house. They acquitted him of the last charge that he sexually assaulted the girl in his car in the car park of a Cork city hotel in 1998.

A longstanding member of the Labour Party in Cork and a widower , Murray was first elected to Cork City Council in the 1985 local elections and re-elected in 1991. Two years later he was elected lord mayor of Cork under a pact between Fianna Fáil, Fine Gael and Labour.

There were emotional scenes outside Court No 2 in the Washington Street courthouse after the verdicts as the complainant and her parents and other family members hugged each other before thanking the investigating gardaí for all they had done.

The complainant, a woman now in her early 30s, had told the jury that she was 13 when she was first sexually assaulted by Murray after he told her she was a beautiful girl and began kissing her lips and neck and groping her breasts.

The complainant said she and her parents and others confronted Murray about the abuse in 2011.

In court, Murray said that he was “sick to his stomach” when he read the complainant’s statement and he couldn’t understand why she was making such allegations against him.

The woman told the court that the reason she didn’t come forward until adulthood was that she was afraid that she wouldn’t be believed. “I never said he threatened me, he didn’t have to, he intimidated me - he was a very high profile man, he had been lord mayor.”