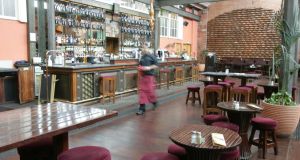 The Market Bar on Fade Street in Dublin has been fined for breaking the smoking ban. Photograph: Alan Betson/The Irish Times.

A Dublin pub co-owned by restaurateur Jay Bourke and Electric Picnic founde r John Reynolds has been fined for breaking the smoking ban. The Market Bar was prosecuted after it had been inspected by a HSE environmental health officer.

The HSE had summonsed the company, with a business address at Molyneux House, Bride Street, Dublin 8, following complaints from the public about smoking at the restaurant and pub, which has seating capacity for about 300 .

Mr Bourke attended the hearing at Dublin District Court in which his company was ordered by Judge John O’Neill to pay the fines within three months and to cover the HSE’s costs in bringing the case.

Senior environmental health officer Michael McAleer told the HSE’s solicitor Marie Kinsella that on August 9th last year he inspected the ground floor smoking area at the Market Bar after a complaint from a member of the public who had alleged the smoking ban was being broken there.
No roof
He said that to be exempt from the provisions of the legislation there had to be no roof on the smoking area and “this did not apply, the area was completely covered”. He also noticed a man and woman smoking in that area .

Mr McAleer conducted an inspection of the first floor at the pub on September 20th. He said that was “effectively an enclosed room” except for a slightly opened skylight. Staff were serving customers and Mr McAleer said he saw four people smoking in the area .