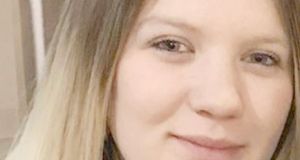 Katie Kehoe of Coach Road in Dunmanway, Co Cork, who was disqualified from driving for two years at Clonakilty District court on Monday.

A woman who rammed her boyfriend’s car leading him to jump onto the bonnet of her vehicle to avoid serious injury has been disqualified from driving for two years.

Mother of one Katie Kehoe (21), appeared before Clonakilty District Court on Monday where she was sentenced in relation to what gardaí called a domestic dispute which spiralled out of control.

Ms Kehoe of Coach Road in Dunmanway, Co Cork pleaded guilty to three charges. These included the production of a pair of scissors in the course of a dispute and dangerous driving.

Garda Liam Galvin told the court that at 11pm on November 11th, 2018 gardaí received a phone call regarding an alleged domestic dispute on Kilbarry Road in Dunmanway.

Garda Galvin said that when he and another garda arrived at the scene they noticed damage to the left hand side of one car which also had a flat tyre. Another car was parked a few feet away.

The injured party, who has since reconciled with Ms Kehoe, told gardaí that Ms Kehoe was “going mad” and had rammed the side of his car. He claimed she also waved a pair of scissors at him.

Garda Galvin said that Ms Kehoe was “very agitated and aggressive.” She admitted she had rammed the car and was subsequently arrested.

CCTV footage was obtained from the scene. It showed the man at one point standing between the two cars.

Garda Galvin said the man had to “jump on the defendant’s bonnet while [it was] colliding with the side of his vehicle, narrowly missing being seriously injured”.

He also told the court that CCTV showed Ms Kehoe chasing the man down the middle of the road while she was holding a pair of scissors.

Gardaí said she had also jumped on the other car ripping off the wipers and hitting the vehicle with a pair of scissors.

The couple have since reconciled with the man wishing to withdraw his complaint.

At Clonakilty District Court on Monday Ms Kehoe was given a two-year mandatory disqualification from driving arising from her conviction for dangerous driving. She was also ordered to pay a €500 fine.

However, he stated that the disqualification was mandatory. He insisted he could not entertain her solicitor’s suggestion that as a mother of a child she needed to drive.