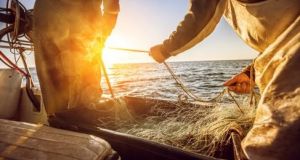 Two trawler-owners have been fined a total of €500 and ordered to pay €350 in costs after they admitted breaches of maritime safety regulations on one of their fishing vessels during an inspection by an official from the Department of Transport, Tourism and Sport.

Brothers William (65) and Patrick Price (62), both with an address at Stephenstown Industrial Estate, Balbriggan, Co Dublin, pleaded guilty to two offences in relation to their trawler, Catherine Alice, when they appeared at Skibbereen District Court on Tuesday.

Both pleaded guilty as owners of the Catherine Alice to failing to have details of abandon-ship drill, fire drills, other life-saving drills and training procedures recorded in the trawler’s log when it arrived at Union Hall in West Cork on November 4th, 2015.

Both also pleaded guilty to a second charge as owners of the vessel of failing to have the required quantities of medicine and medical equipment on board when the vessel arrived at the port on the same date.

State solicitor for West Cork, Malachy Boohig, told Skibbereen District Court the charges followed an inspection of the trawler, which fishes out of Balbriggan in Co Dublin, by engineer Eoghan O’Toole, a ship’s surveyor from the Depart of Transport.

Mr O’Toole told the court he had previously inspected the trawler in May 2015 and the logbook was missing, while he also noted a problem with a resuscitation kit which included a supply of oxygen.

He said when he checked the vessel after it docked at Union Hall on November 4th, 2015, he again found the logbook was not on board the vessel, as required by law to allow the recording of safety drills and training procedures carried out by crew.

Defence solicitor Colette McCarthy said the resuscitation kit had been removed after a piece of piping was found to have perished during the May inspection. The kit was being upgraded but had not yet been returned to the vessel through inadvertence.

The logbook was back at the Prices’ base in Balbriggan, but it was handed into the Department of Transport in Dublin that evening to allow it leave port after Mr O’Toole issued an order that it was not to sail until the logbook was produced.

Ms McCarthy said the skipper of the Catherine Alice, Darren O’Sullivan, was religious in ensuring safety and training drills were carried out on the trawler every fortnight. I was of no benefit to him or his crew not to carry out such drills.

She said the two Prices were fourth-generation fishermen from Balbriggan who owned a total of five trawlers, and they had no previous convictions of any kind for any breaches of maritime safety regulations.

In light of the fact both men had been fishing all their lives without any previous convictions, he believed the appropriate penalty was a fine of €250 for each defendant, while he also ordered them to each pay €175 towards the State’s costs in bringing the prosecutions.