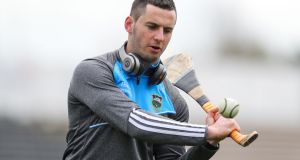 Tipperary hurler Cathal Barrett has been remanded on continuing bail charged with a drink-driving related offence.

Mr Barrett (24), of Beakstown, Holycross, Co Tipperary, is charged with being in charge of a vehicle on O’Donovan Rossa Street in Thurles on March 3rd last “with the intent to attempt to drive the vehicle” while over the legal alcohol limit.

The charge sheet states that Mr Barrett had 65mg of alcohol per 100ml of breath, where the limit is 22mg per 100ml. It also states that he was “not driving or attempting to drive” the vehicle.

When the case was called at Thurles District Court on Tuesday morning, Mr Barrett was not present and the matter was put back.

The case was called again later in the day and Patrick Kennedy, solicitor for the accused, said he was in court at that stage, having travelled from Limerick.

He told Judge Flann Brennan that Mr Barrett was late because of a “misunderstanding”.

No evidence was heard and the case was adjourned to June 5th, when a date for the hearing is to be set.