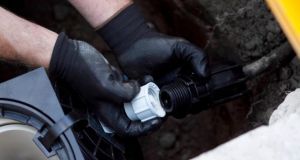 A man in his sixties has appeared before Cork District Court charged with damaging water meters and stealing keys from a van belonged to a water meter firm. File photograph

A man in his sixties has appeared before Cork District Court charged with damaging water meters and stealing keys from a van belonged to a water meter firm.

Brian Gould from Cathedral Road on the northside of Cork city was charged with eleven offences in relation to damaging meters at addresses in Carrigaline, Cork.

One of the charges the 64-year-old faces is in connection with stealing keys from a van belonging to a water meter company.

Ten of the charges involved alleged damage to water meters to the value of €800. The sole remaining charge involves the theft of a set of van keys, to the value of €50, the property of a water meter contractor. The alleged offences occured between May and August of last year.

Mr Gould’s solicitor, Catherine Kirwan, asked Judge Leo Malone for all the charges to be heard at Circuit Court level.

Judge Malone agreed that the theft charge go before a jury at the Circuit Court. Mr Gould will appear before Cork District Court again on April 17th in relation to the other ten charges.

Free legal aid was granted in the case as Mr Gould is in receipt of social welfare payments.

Close to a hundred anti-water charge supporters were outside Cork District Court for the brief hearing on Friday.

Flu vaccine delay should be resolved by end of October - IMO 12:18
Covid-19: Restaurant industry left ‘in a vacuum of the unknown’- RAI 12:06
Further restrictions expected for Dublin if Covid-19 infection rate does not stablilise 12:01
Rise in Covid-19 hospitalisations ‘a very concerning trend’, says Paul Reid 11:37
Three passengers arrested after €245,000 of cocaine seized at Dublin Airport 11:09