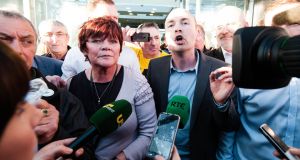 Joan Collins TD and Paul Murphy TD after they appeared in court in connection to water charges protests. Photograph: Courts

Thirty-two men and women, including two TDS and two councillors, aged from 18 to 64, from across the capital were summonsed to face a special afternoon sitting of Dublin District Court on Monday.

Charges were brought in connection with three separate cases which are all connected to anti-Irish Water demonstrations, including last November’s Jobstown protest involving Joan Burton.

The Labour leader and her entourage had left a graduation just after midday on November 15th, 2014, at An Cosan at Jobstown, in Tallaght, an education facility that serves the community, when a demonstration was held which delayed her for about two hours. Ms Burton and her team had been attempting to travel by car to St Thomas’s Church, a short distance away, for the rest of the ceremony.

Mr Murphy and 17 other people from Dublin were summonsed to appear before Judge Michael Walsh at Dublin District Court on Monday to face a variety of charges which included false imprisonment of Ms Burton and her political advisor Karen O’Connell, violent disorder and criminal damage to garda cars, at Fortunestown Road.

Hundreds of protesters came to the Criminal Courts of Justice building to give support to them, as well as to Joan Collins TD, who along with 10 others faced a public order charge arising out of a separate protest in April this year at Harold’s Cross in Dublin.

Mr Murphy spoke once in court saying “yes” as he stepped forward and nodded when the judge asked if he was present. He is facing two charges of false imprisonment of the Tánaiste and her advisor.

State solicitor Rachel Joyce said the DPP has directed “trial on indictment” meaning the case will go before a judge and jury in the circuit court. However, no plea has been entered by the TD or his co-defendants who were ordered to appear again at the same court on December 14th next when it is expected they will be served with books of evidence and returned for trial.

Meanwhile, Joan Collins TD from the United Left Alliance appeared in court on a public order charge for failing to comply with a garda’s direction to leave the vicinity of Parnell Road, at Harold’s Cross in Dublin during an anti-Irish Water protest on April 20th this year. She and 10 co-defendants will appear again on November 30th when it is expected they will enter pleas.

The politician did not address the court but defence solicitor Cahir O’Higgins said the case raised complex constitutional issues in relation to the right to protest. Their public order charges are to remain in the district court and can result in maximum sentences of eight and 12 months.

She had 10 co-defendants have charges in connection with alleged incidents at Parnell Road.

They were granted an order for disclosure of all garda evidence in connection with the incident. This included CCTV and footage thought to be in possession of UTV Ireland. However, Judge Walsh would not grant an order for third party discovery of alleged communications between gardaí, Irish Water and meter installation company GMC Sierra.

Meanwhile, three other people, two men and a woman, were accused of engaging in threatening and abusive language which was allegedly directed at President Michael D Higgins during a protest at Cappagh Road in Finglas in Dublin on January 23 last.

Derek Byrne (36), of Streamville Rd, Kilbarrack, Anna Clarke (35) from St Donagh’s Road, Donaghmede, and *Diarmuid Dubhghlais (41) of Parc Ui Mhaoiliosa, Finglas were ordered to appear again on November 30th when they will be expected to enter pleas to the charge which can result in a fine and a sentence of up to three months. Ms Clarke did not attend court but the judge decided not to issue a warrant and said gardai would have to caution her to attend on the next date.

Solicitor Cahir O’Higgins, who acts for them, said there will an constitutional issue as to whether the president can be summonsed to give evidence in the trial.

A false imprisonment charge can carry a life sentence and after leaving court 32-year-old Paul Murphy – with an address at The Copse, Woodpark, Ballinteer, Dublin – told reporters he would contest the case when it goes to trial. He said he and his co-defendants intended to launch a “vigorous defence”.

His co-defendants face a variety of charges.

Dylan Collins (20) from Bawnlee Green, Tallaght, is accused of violent disorder and criminal damage to a garda car.

Glen Carney (20) of Cloonemore Park, Tallaght, faces two counts of false imprisonment and one for violent disorder. He could not attended and had his case adjourned in his absence.

Paul Kiernan, a 39-year-old with an address at Brookview Way Tallaght, has one violent disorder charge and two counts of false imprisonment.

Ken Purcell, (49) who has the same address has two false imprisonment charges.

Michael Banks, (44) with an address at Brookview Green Tallaght, also has two counts of false imprisonment.

Adam Lyons (21), of Drumcairn Drive, Tallaght, has two counts of false imprisonment and one for violent disorder.

Keith Preston, a 25-year-old with an address at Sundale Lawns in Tallaght, is also facing trial on two counts of false imprisonment and one for violent disorder. He could not attend but his solicitor Michael Finucane explained that this was because his client had received an injury.

Peter Herbert (64) from Rossfield Park Tallaght also faces two charges of falsely imprisoning the Labour leader and her assistant, and one extra charge for violent disorder.