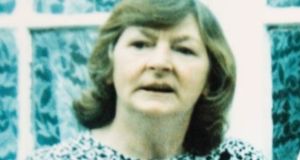 A man was charged with the murder of Limerick woman Rose Hanrahan at a special court sitting on Thursday night.

Alexandru Iordache (45), a Romanian national, was extradited to Ireland from the UK on Thursday afternoon and brought to Limerick District Court, where he was charged with murdering the 78-year-old widow, between December 14th and 15th, 2017.

Ms Hanrahan, who lived alone, was found by relatives in her home at New Road, Thomondgate, Limerick, on December 15th.

Mr Iordache, with an address at Dreptatii Street, Bucharest, Romania, who wore a navy jacket, maroon jumper, beige trousers and dark runners, did not speak in court.

He stood throughout the 10-minute hearing, listening to a Romanian interpreter relay the proceedings to him.

Detective Garda Enda Haugh of Mayorstone Garda station told the court he arrested the accused at Dublin Airport at 4.10pm on Thursday, “on foot of an arrest warrant for the murder of Rose Hanrahan”.

Detective Haugh said it was explained to the accused in his native language why he was being arrested, and said “he indicated he understood”.

He conveyed Mr Iordache to Henry Street Garda station in Limerick city, and charged him there at 7.56pm on Thursday night.

The court heard the accused did not reply when charged with Ms Hanrahan’s murder.

The accused made no reply to any of the 12 charges, the court heard.

Inspector Bill Wallace, of Henry Street Garda station, told the court the Director of Public Prosecutions (DPP) had directed the accused face “trial on indictment” in relation to all of the charges, including that Mr Iordache face trial on indictment on the murder charge “at the Central Criminal Court”.

Solicitor John Herbert, defending, said he was not seeking bail.

Judge Marian O’Leary remanded the accused in custody to appear before Limerick District Court on January 21st, and directed a certified Romanian interpreter be present for Mr Iordache’s appearance.