Man charged over damaging Garda station with lighted aerosol can 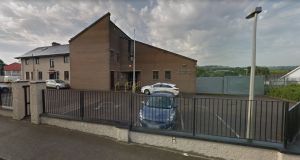 Paulias Kazlauskas charged with criminal damage to a hatch in the public office at Togher Garda station in Cork. Photograph: Google Street view

A 38-year-old man has been charged in connection with an incident where an aersol spray was set alight inside a Garda station and thrown at an officer.

Paulias Kazlauskas has been charged with criminal damage to a hatch in the public office at Togher Garda station in Cork following the incident at about 1.50am on Saturday morning.

It is alleged Mr Kazlauska, from Lithuania, had just been released from garda custody at Togher Garda station following his arrest earlier in the night for being drunk and disorderly when the incident happened.

It is also alleged Mr Kazlauskas tried to throw a punch at a garda and then smashed the glass in the hatch in the public office at the station and flung a lighted can of deodorant at the hatch.

Nobody was injured in the incident and gardaí quickly extinguished the blaze but the public office had to be closed for a number of hours to allow a Garda technical expert examine the scene.

Mr Kazlauskas was arrested at the scene and detained before being later brought before a special sitting of Cork District Court where he was charged with a single count of causing criminal damage.

Det Garda Pat Connery gave evidence of arrest, charge and caution and told the special sitting that Mr Kazlauskas made no reply to the charge when it was put to him after caution.

Insp Noel Madden said gardaí were seeking a remand in custody and the court was told that Mr Kazlauskas was not making any application for bail on the single charge at this point in time.

Judge Con O’Leary granted the state application for a remand in custody and remanded Mr Kazlauskas of No Fixed Abode in custody to appear again before Cork District Court on June 12th.