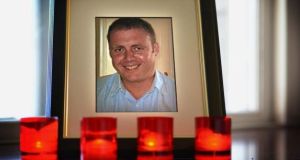 The Director of Public Prosecutions (DPP) has directed that a man accused of the murder of Detective Garda Adrian Donohoe in a shooting in 2013 will face trial on indictment.

The officer, a married father-of-two, was killed while on duty.

Det Garda Donohoe had been on a cash escort with colleagues when he was fatally shot during a botched robbery in the car park of the credit union.

Mr Brady was charged on Sunday and remanded in custody following an appearance before Dundalk District Court.

He faced his second hearing on Friday appearing via video-link at Cloverhill District Court. Dressed in a grey tracksuit and black runners, and sitting with his arms folded, he spoke a number of times initially confirming his name and later to confirm instructions to his lawyers.

Det Inspector Pat Marry, who arrested him, was also present for the hearing.

State solicitor Michael Murphy asked Judge Victor Blake to adjourn the case for four weeks adding the DPP has directed “trial on indictment”. This means the accused will face trial in the Central Criminal Court.

Defence counsel Conor Fegan, instructed by solicitor Niall Manley, asked Mr Brady if he consented to being further remanded in custody for four weeks instead of two.

The accused replied “yes” and had the same answer when asked by Judge Blake if he was agreeable to appearing via video-link at his next hearing.

Judge Blake further remanded him in custody pending the preparation of a book of evidence. The case resumes on April 6th.

He had been arrested in Dublin on February 25th and was detained for a week at Dundalk Garda station under the provisions of section 50 of the Criminal Justice Act 2007.

At his first hearing on Sunday, Det Inspector Marry said when Mr Brady was charged with the murder, he replied: “I strongly deny any involvement in the murder of Detective Garda Adrian Donohoe.”

Bail can only be granted by the High Court in murder cases.

A man in his sixties, who was arrested in Dundalk on February 26th as part of the investigation into the the murder of Det Garda Donohoe, was released without charge on Saturday night.