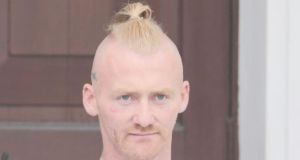 Robert Broughan (25) was charged at a sitting of Naas District Court on Sunday afternoon. Photograph: Collins

A 25-year-old man has been charged with the murder of Roy Hopkins, who died following an assault in Co Kildare on Friday night.

He was taken by ambulance to Naas General Hospital where he was subsequently pronounced dead.

He told the court that Mr Broughan has been charged at 2pm on Sunday afternoon. When cautioned, the court was told that he replied: “Are we going to Naas?”

Speaking in court, Det Garda Doyle said Mr Broughan and Mr Hopkins were known to each other and attended the scene together.

The detective said Mr Hopkins died following an assault by a “blunt instrument” which, he said, gardaí believed to be a baseball bat.

However, he added that specific details of the case were still being investigated.

Mr Broughan has been remanded in custody at Cloverhill prison until Thursday, August 6th, on which day he will again appear before Naas District Court via video link.

Mr Broughan, who works as a landscaper, will also undergo a full psychological assessment as well as any treatment if necessary.

Judge Desmond Ziadan said “irrespective of the outcome of the trial”, he wished to “acknowledge the loss of life” of Mr Hopkins and extended his sympathy to both the victim and his family.

A post-mortem of Mr Hopkins is scheduled to take place at a later date and will be conducted by the State Pathologist.