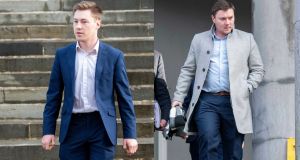 Two sons of Independent TD Michael Healy-Rae have been convicted of a series of assault charges arising out of an incident at a chip van in Kenmare, Co Kerry during Christmas 2017.

Judge David Waters said he had no doubt that Jackie Healy-Rae, his brother Kevin Healy-Rae and Malachy Scannell, also from Kilgarvan, were guilty of the charges.

In September, the complainant, Kieran James (30) who grew up in the UK but whose mother comes from Kilgarvan, told Kenmare District Court that he was assaulted by all three accused during a night out in Kenmare in the early hours of December 28th, 2017.

Mr James said Kevin Healy-Rae pushed him against the chip van so he pushed him back. He said Jackie Healy-Rae the grabbed him in a headlock for about 30 seconds so tightly that he could not breathe.

His companions pleaded with Jackie Healy-Rae to release him and when he did, they all walked up Main Street. They had gone a short distance when they heard shouting and saw the three accused, the court heard.

Mr James said Jackie Healy-Rae caught his right arm and pushed it up behind his back and they grabbed him by the jacket before punching him. This second assault lasted about 30 seconds as he struggled to protect himself, the court heard.

He said that he received six or seven punches to his face which resulted in his nose bleeding. He subsequently had to have two nose operations. He also suffered a cut over his eye and a torn shoulder ligament.

He said gardaí had failed to fully investigate a complaint of assault made by Kevin Healy-Rae against Kieran James on February 28th.

In his judgement, Judge David Waters said he had no doubt what had happened. He said an assault occurred at the chip van and Jackie Healy-Rae got involved, he said, when he was faced with a choice.

“Jackie Healy-Rae should have exercised proper judgement and told his brother to go, but he came back and got involved and assaulted Kieran James when he caught him in a headlock. That’s what happened. The evidence from Kieran James was quite compelling,” Judge Waters said.

Judge Waters said Jackie Healy-Rae had identified himself and his brother in the CCTV footage.

“It’s quite clear that, contrary to what the three defendants said, the three were together in group, running up Main Street and engaged in an assault, That’s what I saw.”

Judge Waters convicted the accused men on all charges. He adjourned the case for sentencing to December 6th.