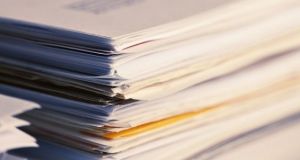 Court hears information came from the Department of Social Protection

Two Garda brothers and a civil servant passed confidential information on to a private detective agency, a court heard on Monday.

Private investigation firm Eamonn Ó Mordha & Co Ltd and one of its directors Ann Moore (61), also known as Ann Ó Mordha, were each fined €10,000 after entering guilty pleas to 12 counts of breaching the Data Protection Act, while 25 other charges for the same offence were withdrawn.

The two gardaí, who were her nephews, and a civil servant friend who worked in the Department of Social Protection, also provided her with private personal information on men and women.

Ms Moore and the private detective agency which is run from her home at Limetree Avenue, in Portmarnock, Co Dublin admitted disclosing unlawfully obtained information on 12 people to insurance firms in 2015 and 2016.

The prosecution came following an investigation into the private detective sector by Tony Delaney, head of the Special Investigations Unit at the office of the Data Protection Commissioner.

Mr Delaney told Judge John Brennan at Dublin District Court that he received reports written by the defendant company in 2014 and 2015 for insurance firms. He said it seemed that criminal records and social welfare records may have been accessed in preparing the reports.

On July 6th, 2016 he went to the Garda HQ in the Phoenix Park in Dublin and asked to see access logs on the Garda Pulse computer system. Two serving Garda brothers, based in Edenderry, Co Offaly and Kevin Street station, Dublin, had accessed records of people of interest to the private detective firm.

Mr Delaney said that on September 26th, he interviewed one of them and discovered he was a nephew of Ms Moore. She had contacted her nephew to obtain information in relation to individuals or vehicle registration numbers. The garda told Mr Delaney that his aunt looked for the information out of concern for the safety of her husband while carrying out surveillance. His brother was interviewed two days later in a station in Dublin and gave the same explanation.

Mr Delaney agreed with prosecution solicitor Claire McQuillan that there was a simultaneous investigation into access to social welfare records.

In one example cited in court, the private detective firm had been asked by an insurance firm for information about a woman whose husband had died in a workplace accident which became the subject of a claim. The detective’s report had her maiden name as well as information about who lived at her home, her two dependant children with their names and dates of birth, and if her circumstances had changed.

Mr Delaney said he was satisfied all that information came from the Department of Social Protection. Other details about a vehicle came from the Garda Pulse system.

A civil servant was interviewed at Gandon House on Amiens Street in Dublin and admitted she had been friends with Mr and Ms Moore for years. She told Mr Delaney that Ann Moore asked her to search for information and she would give it to her the next time they met. She accepted that she had accessed the records on foot of request from Ms Moore.

Judge John Brennan said it was utterly reprehensible and shocking that the information could be accessed with such ease.

Convicting Ms Moore and the firm, he ordered them each to pay fines of €10,000 within six months, along with the costs.