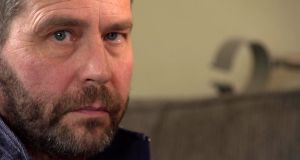 Quinn Industrial Holdings director Kevin Lunney, who was abducted from outside his home. Photograph: BBC Spotlight

Four men are to face trial at the Special Criminal Court in connection with the false imprisonment and assault of Quinn Industrial Holdings director Kevin Lunney last year.

A fourth defendant, who cannot be named for legal reasons, was also remanded in custody.

All four men, who were arrested in November, are charged with the false imprisonment of Kevin Lunney at Drumbrade, Ballinagh, Co Cavan on September 17th last year.

A charge of causing harm under Section 3 of the Non-Fatal Offences Against the Person Act, which carries a maximum five-year prison term on conviction, was withdrawn by the State.

It was replaced by a charge of causing serious harm under Section 4 of the same Act, which carries a maximum sentence of life imprisonment upon conviction.